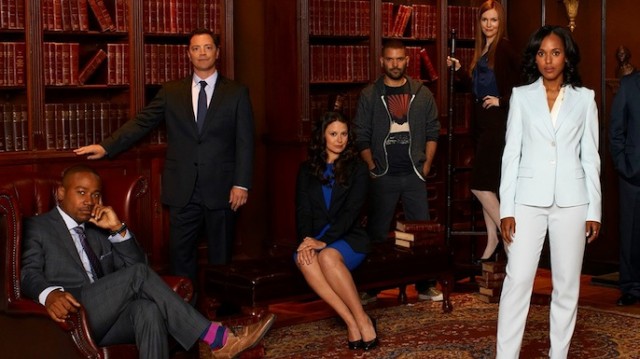 Leading Ladies of Television: What to Watch this Fall

Last season was a good one for some of television’s leading ladies. We got to continue to invest in our old favorites, from the harlot with impeccable taste in white trench coats to the waffle-loving politician, and were introduced to some new ones – like the self-involved OB/GYN with a love of patterned blouses and A-line skirts. Last season’s finales left us with a ton of questions and excitement, as well as a little bit of anxiety and chest pain. Here are some women whose stories I can’t wait to get back to this fall.

My love for “The Mindy Project,” and my admiration for Mindy Kaling for creating such a wonderful antithesis to the traditional quirky waif of a white female sitcom lead, is no secret, as I’ve tried to slip Kaling and the show into nearly everything I’ve written since its first season premiere last September. The fact that I’ve watched the last three minutes of the season one finale seventeen times (and counting) was a secret until just now. The will they or won’t they dynamic between Kaling’s Mindy Lahiri and Danny “Dr. Body Roll” Castellano was a prominent theme throughout the first season and contributed to a murked heart on my part after the answer became: They won’t. At least not now.

In the second season, which premieres on September 17th on Fox, we’ll get to see what happened after that not-kiss with Castellano (although it was hotter than an actual kiss, right?), whether or not Mindy followed through with her plans to go to Haiti with her boyfriend Pastor Casey – rumor has it the two get married – and continue to watch Nurse Morgan Tookers be his bizarre but loveable self. Mindy’s decision on whether or not to go to Haiti was pivotal in last season’s finale, and she struggled with the idea of giving up her life to move with her boyfriend of only a few months to a country that she was entirely unfamiliar with while still maintaining her independence. I’m excited to see where she landed on this and will continue to invest in the slow burn of Danny and Mindy’s relationship. Also, now that Xosha Roquemore’s Tamra has been promoted to a regular cast member in season two, I’m eager to see whether or not the treatment of Tamra evolves into anything more than a stereotypical, let me sing everything, black church lady. Fingers crossed.

Shonda Rhimes loves to torture us, and she succeeded with one of the most Oh Lord Jesus nail-biting season finales as season two closes with us finding out that the one paying Captain Jake Ballard to seduce gladiator Olivia Pope, attempting to sabotage her relationship with Fitz, and maybe trying to kill her, was her own father. I suppose that the fact that her father may be just as suspect as she is shouldn’t be surprising. Pope is the quintessential antihero as the head of Pope & Associates. Her team is relentless in terms of literally doing whatever it takes to be successful at covering up the scandal of the moment while continuing to protect their own secrets as well, even if for Olivia that means damaging the lives and relationships of her own colleagues in the process. And yet we still root for her, terribleness and all. Perhaps it’s because a character like hers, a boss lady woman of color who will stop at nothing to accomplish her task, a strong black woman, but not a Strong Black Woman, is so rare, that we feel as though we have to be here for her regardless of how terrible she might be. The point is, however, that so many of us are in this with her, and there are some questions that we’re desperate for answers to in season three. Why is her father coming for her? What’s the status of her relationships with both Ballard and President Fitz? Is Harrison going to actually get a storyline? Is Quinn Perkins the new Huck? Season three, which returns on October 3 on ABC, will hopefully provide us with some relief, and likely lay some more nail-biters on us as well.

Another antihero is Carrie Matheson of “Homeland,” whose questionable and often manic decisions make me throw my hands in the air and wonder what exactly it is that makes her continue to jeopardize her career for a man whose own intentions I’m equally confused about. At the same time, however, Carrie is brilliant and has achieved success in a traditionally male-dominated field while desperately trying to manage a mental illness that continues to be both one of her greatest assets, allowing her to see things much differently than many of her coworkers, and a serious impediment on her ability to do her job. In the season two finale, Carrie continued her allegiance with Brody, helping him go on the lam after convincing her that he was framed for the C.I.A. headquarters bombing. We’re left to decide whether or not Brody was framed and was sincere with Carrie, and wonder how she will cope with the loss of a man she seems to love, but maybe doesn’t trust her own feelings for. The season three trailer offers some insight, and, not surprisingly, Carrie’s quivering chin is back and it appears as though she will again struggle with all things Brody. The trailer also alludes to Dana Brody’s own struggles with understanding her father, as a newspaper clipping in the trailer points to her admittance to a mental health clinic. Personally, I’m excited that Dana may just get interesting this time around. “Homeland “returns on September 29th on Showtime.

The final season of “Breaking Bad” just premiered on the 11th and my rage for science teacher turned evilest human on the planet Walter White is pulsating like a beating heart along with my sadness for his defeated wife, Skyler. The hatred for Skyler White baffles me, as she is the penultimate Stand By Your Man prototype. This woman has had multiple opportunities to bounce, either alone or with her babies, and instead chose to stay in this toxic relationship with a man whose emotional range begins and ends with greedy, terrible, human mess. Her main concern appears to be her children, along with the fact that she bears at least some responsibility for her husband’s involvement in and profit from the meth business, as she has assisted in laundering Walter’s blood money. By now we know that Hank knows what Walt has been up to, but we’re not necessarily sure what he’s going to do with this information, and he maybe screwed himself by showing Walt his cards so early. But Skyler is under the impression that Walt has turned from breaking bad – he’s out, and that it’s a secret between the two of them. In the premier, they’re both adorned in beige, running the car wash like the nice, good suburban family that they want to present themselves as. While the fate of Walter (and my sweet, sweet Jesse) is the focal point of this final season, I’m also concerned about Skyler, the forgotten beneficiary of Walter’s turned bad lifestyle. I want to see Skyler get some redemption. After being held captive by her sociopath husband for so long, she deserves it.

The biggest surprise of the season five “Parks & Rec” finale was that staunch carnivore and breakfast food connoisseur Ron Swanson is going to be a father. While Bert Macklin’s solving of the pregnancy test investigation (he tried) was the focus of the episode, the finale posed some questions for the not-pregnant women of the show as well. Ann Perkins wants to be pregnant, and with the news that this will be the last season for both Rashida Jones and Rob Lowe, we’ll hopefully get an answer to the fate of their relationship – and their maybe baby – this season. The decision for Ann and Chris to have a baby together, and then rekindle their relationship, took some reflection on what exactly was important to them both individually and as a couple. April’s announcement that she wants to go to veterinary school in Bloomington seems to have required a similar thought process. The perpetually disinterested April may have actually found something that she’s interested in. A career in a field that she loves, along with support from Andy, could prove to be a strength in her relationship and a jumpstart to her life. Our fearless leader Leslie Knope is faced with angry Pawnee residents who think that they’re worse off than they were the year before, and whose mission is to recall city councilwoman Knope. How she responds, and whether or not disgruntled Pawneeans succeed in their goal to oust Leslie, will surely be a focus this season. Donna, who in the season five finale quickly shuts down speculation that she might be the owner of the positive pregnant test, as she’s a grown woman who knows how to take of herself, seems to be the only woman without a turning-point decision to make in season six.

Which leading ladies are you looking forward to watching this fall?