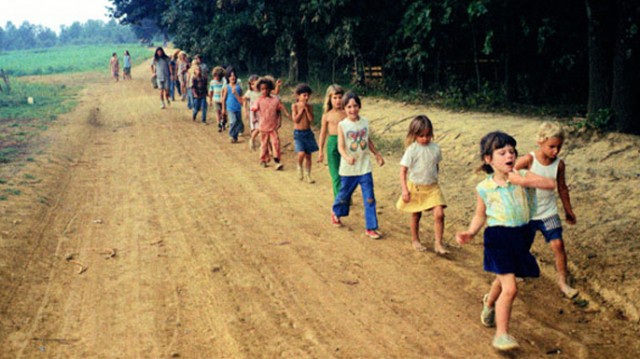 Learning To Love The Farm: A Glimpse Inside American Communes

It took me years to tell anyone I was born on a commune in rural Tennessee. When I left and moved to Los Angeles at 12 it wasn’t something I felt my new friends would understand. For most of my peers, even the word commune conjured up images of naked, drugged out, hippies running around in the woods. As the new kid in school that wasn’t exactly the first impression I was trying to make. So I hid my past like a closely guarded secret, obscuring it beyond recognition. After a few years in Los Angeles, you couldn’t tell me apart from any other kid.

In my 20s, I ended up working as a director for MTV and the largest media empire in the world. From my office on the 26th floor overlooking Times Square, I’d peer out and marvel at the hundreds of thousands who flocked there. By most people’s standards I’d made it, but somehow it didn’t fulfill me in the way it was supposed to and I began to question where I came from. Having spent so many years hiding my past on the commune, which was called The Farm, I began to feel this intense need to understand it. That next summer, my sister and I decided to return for a reunion. We hadn’t been back since leaving in the mid-80s but as soon as I set foot on the main dirt road, my memories came flooding back.

My parents were some of The Farm’s early founders in the 1970s. They, along with 300 others, arrived in a caravan of wildly painted converted school busses and settled on a large plot of land an hour and a half southeast of Nashville. Contrary to negative stereotypes of hippies, they were quite strict about living a spiritually pure life and creating an alternative society. They established tenets to live by. The basis was that they would share everything and fork over all their money and personal possessions. They were strict vegetarians; the saying was “Don’t eat anything you can look in the eye.” Vanity was frowned upon, so make up, perfume and jewelry were not allowed. Violence and alcohol were also forbidden. They grew their own food and succeeded in building a self-sufficient society.

By the 1980s The Farm became America’s largest commune with 1,500 permanent members and 10,000 visitors a year, many were woman coming to have their babies delivered by The Farm midwives. I was born at home, as were my brother and sister and thousands of other children.

There were over 60 communal houses that packed between 30 and 60 people each. We did not have a refrigerator or indoor plumbing. There was an outhouse in the back, which us kids avoided using after dark. We were terrified of walking through the pitch black with the crickets, faceless creatures and spirits that we were certain roamed the woods at night. Families shared chores and child rearing. The women alternated cooking nights and everyone ate meals together at massive tables. We rarely had anything sweet, as sugar and oil were hard to come by. Occasionally when the commune store received sugar, we’d get our rations, which were maybe a ¼ cup per person. My mom would open up the jars of canned blackberries and make cobbler. We savored each bite, knowing we’d picked the blackberries ourselves, got chiggers up and down our spindly arms and legs the summer before. We knew how much the cobbler meant, how hard we’d worked for it and that we wouldn’t be getting more of it for a long time.

In school we learned all of the normal subjects, but there was an emphasis on world politics and the environment. From a young age, we were instilled with the idea that it was our responsibility to grow up and change the world. Our parents even removed the guns from Star Wars figures before the kids could play with them, because if you can play war then you can participate in war.

But the flip side to all this was an intense pressure to conform to the group. As a child I remember feeling lost in the crowd. If we tried to get attention we were reprimanded for “being into The Juice.” The Juice was the collective energy and bringing too much attention to oneself was frowned upon. People criticized each other for even the slightest deviation from their rules.

When my sister and I returned to the reunion we were nervous because it had been so long and we didn’t know what to expect. We soon ran into childhood friends who shared our experience and we reminisced over what it had been like to assimilate into mainstream culture.

After spending a week on The Farm, I gained a newfound respect for how hard everyone worked to create an alternative society. The commune during its heyday was not perfect, but it was courageous and noble. I now know my core beliefs about how to behave in the world were shaped there. As my plane descended into the New York metropolis, I peered out the window at the grey horizon and was suddenly overwhelmed with pride about coming from such a unique place.

Rena Mundo Croshere and her sister Nadine Mundo are completing a documentary on The Farm called AMERICAN COMMUNE. You can learn more about their project or become a backer on their American Commune Kickstarter page. Follow them on Twitter or check out their Facebook page.

I sometimes make the mistake of trying to figure someone out; with the intention to fix them.