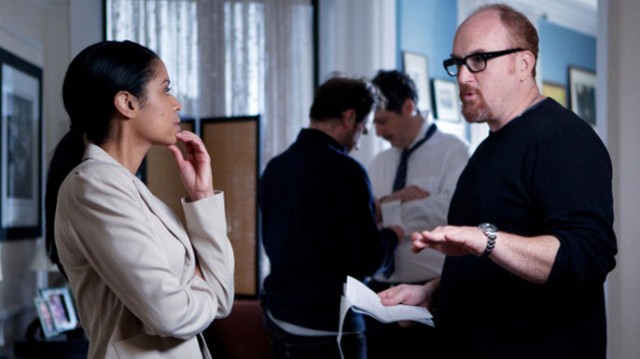 Why Is Louis C.K. Able To Write A Female Black Character When Lena Dunham Can’t?

There’s a good chance that for the past few months you have been overwhelmed with various blog posts, gifs, Facebook statuses and tweets from everyone from that mouth breather of a girl you haven’t spoken to since prom to your obnoxiously chatty co-worker, regarding their opinion on the lack of representation of people of color in film and television and whether or not this lack of representation is problematic or even significant at all.

A lot of the vitriol surrounding the lack of representation issue has been directed at Dunham and the premiere season of her show Girls. Many wondered how a show centered around four young women navigating life, love, and HPV in Brooklyn, arguably one of the most diverse areas in the United States, could be so unabashedly white. (The two PoCs we see in the pilot episode are the nerdy Asian who managed to one-up Dunham’s character, Hannah, by landing a job at the publishing company where they both interned, and a homeless black man.) There were plenty of others who leapt to Dunham’s defense, wondering why she had an obligation to portray anything other than the blindingly white life that she was accustomed to. She was, after all, writing what she knows.

It’s not surprising that Dunham and Co. were confused by the backlash. The lack of PoC representation on film and television is nothing new. The fact that Dunham received the brunt of it is due in large part to timing and the fact that we’re now living in a time in which we simply cannot get to our twitter feeds quick enough to report on what’s bothering us, whether it be racial representation on television or the fact that your Comcast technician is 20 minutes late. The response to the criticism fell flat and wasn’t helped at all by Girls writer, Lesley Arfin’s racially insensitive tweet, and subsequent non-apology apology, at the height of the controversy.

What I thought to be the most honest of Dunham’s response to the criticism came in May on NPR’s Fresh Air. Dunham said:

I wrote the first season primarily by myself, and I co-wrote a few episodes. But I am a half-Jew, half-WASP, and I wrote two Jews and two WASPs. Something I wanted to avoid was tokenism in casting. If I had one of the four girls, if, for example, she was African-American, I feel like — not that the experience of an African-American girl and a white girl are drastically different, but there has to be specificity to that experience [that] I wasn’t able to speak to.

I understand, but am not necessarily sympathetic to, the paranoia associated with race talk – of feeling as though you have to constantly walk on eggshells, panicked that you’re going to offend someone, somewhere, if you misspeak. And I believe that Dunham was sincere in saying that she wasn’t confident in her ability to speak to the black experience. However, what Dunham fails to grasp is that for most people of color, our identities as PoCs and our very non-racial experiences in everyday life exist simultaneously.

I have a white mother and a black father and self-identify as black. For anyone who knows me or is familiar with anything that I’ve written, it’s obvious that my racial identity is incredibly important to me. Yet it doesn’t inform every single decision I make or encounter that I have or how I go about mundane day-to-day tasks. Most days, I hit the snooze button more times than I should. Once every few months I tell myself that I should cut back on my coffee consumption and then laugh at myself because coffee is delicious. I avoid phone calls from my parents.

A few weeks ago I giggled when a handsome man in my building got on the elevator and asked, “Going down?” I drink too much wine and don’t get enough sleep and I experience anxiety about nearly everything from which cereal to buy to whether or not I want children. None of these things has anything to do with my being black and you don’t have to know what it’s like to be black to relate to any of that.

At the crux of the frustration is this very basic idea that any of the protagonists in Girls could be played by women of color and nothing would be different. There are undoubtedly plenty of women of color who been privy to the life of sheltered, pink jumpsuit wearing Shoshanna, or who posses the “all adventurous women do” free-spirit attitude of Jessa. Many women of color can relate to the perpetually uptight Marnie and, like Hannah, just as many have been in a complicated relationship with a man who treated them less than great and put up with it. There is nothing about any of these characters that is inherently white or speaks solely to the white experience. It’s entirely feasible that a black or Asian or Latina actress could very believably play any of those parts.

And this brings me to Louie’s black wife. On this past season of Louis C.K.’s Louie, black actress, Susan Kelechi Watson, played Louie’s ex-wife and mother to his two phenotypically white daughters. Louie’s perpetual lack of continuity contributes to the believability factor of his ex-wife being played by a black woman, but reducing it to a brief – Oh, that wacky Louis – seems to be, frankly, not enough when there is something so much more significant at play here. Watson’s Janet, most particularly in the season’s The Late Show trilogy, proved to be a powerful voice in Louie’s life and, in turn, an integral character on the show. In the end, her race was simultaneously a non-issue and a revolutionary casting decision, which is both triumphant and a bit sad.

The man who wrote and directed Pootie Tang, a movie rife with stereotypes of the shuckin’ and jivin’ jiggaboo and sexually threatening black male (although I’m in the camp that the movie was making fun of those who subscribe to these stereotypes and not necessarily exploiting black men themselves. It’s a complicated, circular Sasha Baron-Cohn situation where those who are being mocked don’t get it and are laughing at us, not with us, so the point ends up muddled), got it right.

Louis C.K. figured out how to bring us a black female who was an essential part of a television show, who was none of the stereotypes that black women so often get pegged as on film and television. She wasn’t an angry or sassy black woman, or an overweight and overly abundant, milk & cookies at the ready Mammy, or a sexually promiscuous Jezebel. She was Louie’s really supportive and pretty fantastic ex-wife – who incidentally happened to be black. Meanwhile, handfuls of white writers and creators are still baffled by how, exactly, you create a character of color when you’re not one yourself.

Why don’t we all just let that marinate for a bit.