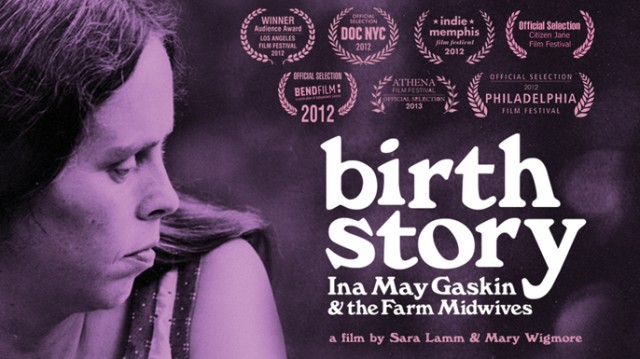 Mary Wigmore and Sara Lamm: The Women Behind “Birth Story”

In the past few weeks of my life, I have noticed a strong theme: women connecting to women through women– a concept that I can only hope will keep repeating itself throughout my life. I am not often caught in modest peace and quiet, but having finished the documentary Birth Story: Ina May Gaskin & The Farm Midwives two hours before I called Mary Wigmore and Sara Lamm, the directors of the film, my mind and heart still lingered in the gorgeous production that is their documentary. Birth Story is a co-directed and produced film about midwifery, as well as Ina May Gaskin: two ideas that are not necessarily concepts everyone can speak to thoroughly. I boast a hometown way up north, a tiny place with a lot of heart; one void of skyscrapers, crowded streets, and dance clubs, but one with a well-known, well-loved birth center. I believe every baby I know was born there; natural parenting is the norm in my town. I have two very close friends in particular that happen to endorse, sustain, and support the concept of midwifery. As a single, childless, young lady, it may seem strange that I have so much to say, that I can even feel so much about the matter at hand, but as a woman, I feel it is totally natural to see past the actual focus of childbirth itself, and breeze right into what I took from this documentary.

Lamm met Wigmore through a mutual friend a number of years ago, and after meeting Gaskin through her doula, Lamm and Wigmore decided to create the documentary at last. I find it incredibly touching that Lamm actually gave Wigmore her first copy of the book Spiritual Midwifery by Gaskin, for it all ties into a grander concept. For those of you who do not know much about Gaskin (yet! Watch this film!) or childbirth, Spiritual Midwifery has a bit of a “traveling pants” vibe to it. Women recommend it to their friends to support them during their first, second, third pregnancies. The book is timeless, as is Gaskin’ views on womanhood—at least I can only hope. Lamm’s “dear friend” gave her her first copy of Spiritual Midwifery with, as Lamm explained to me, an inscription stating that “this is the only book you need to read.” Lamm went on to tell me that it was true, in her key experience as a childbearing woman. “All those positive birth stories, all those journeys, told by women who had confidence in the birthing process and confidence in their bodies–it was just what I needed to prepare. As I got closer and closer to labor, it was the only thing I wanted to do–lie around and read that book.”

When Lamm and Wigmore decided to pool their hearts and passions to create this beautiful, nothing short of inspirational film, they were also, un-ironically, emulating the entire message of their project. Yes, a documentary housing the word “midwife” in the title is clearly about childbirth, but there is something slightly more vital than just subject matter. This film, down to the collaborative directors, is not just about bearing children. This film is about the ever-important support, love, care, and encouragement between women. Two strong, beautiful, and smart women teaming up on this specific project perfectly represents midwifery and the notion behind this documentary. Midwifery is about women (and sometimes men!) being literally in the room with each other during what has to be the most important moment in the life of a human being. Midwife is broken down to literally mean “with woman,” and that is what Lamm and Wigmore were to each other, and for these women spotlighted in the film. They were all with each other.

When speaking to Wigmore, there was no clear end to the praise and respect she has for Gaskin and The Farm. Wigmore discussed how Gaskin “thinks in a big picture way,” which was quite clear to me while watching the film. As Wigmore told me, and I emphatically support, this movie is not necessarily about childbirth but more about women promoting each other’s strength and beauty by supporting what is entirely natural. This is about “women on a grand scale,” as Wigmore stated.

As aforementioned, I am a childless woman. I may always remain so, for I cannot predict my future. I know what I gathered from the film, tears streaming down my face, the urge to call my mother and thank her for bearing four of us, and doing it so boldly. (I was born in my mother’s bed, but she always told me I did whatever I wanted.) I know what I took from the movie personally, for there is a woman named Pamela, a midwife at The Farm, who states aloud while being interviewed something that stuck me. Something that I remembered weeks later without referring to my scattered, soggy notes:

“Once I started helping women, I fell in love with women.”

I fell in love with women not all that long ago, and as a loving, and now overwhelmingly proud woman, I wanted to take that quote from Pamela’s mouth and scream it to the world. She, for me, wrapped up exactly how I feel about this gorgeous project.

When I spoke to Wigmore and Lamm about their intention, their hopes for the significance represented strongest in their film, the two ladies, separately, though clearly of the same mind, resonated their hopes:

“I want people to see the joy in it,” Wigmore told me, speaking of childbirth. She hopes to represent “positive birth stories, which,” she continued, “maybe not as much anymore, but can be really hard to find.”

Lamm agreed of course, describing that she hopes people will feel “emboldened,” and not just from seeing women’s bodies represented so positively (something I constantly try to promote), but by looking to Gaskin as a role model. Lamm told me that “she [Gaskin] is such a strong leader and she shows us that we all are capable of making a difference. Our informal tagline for the film is “Your Body is Not A Lemon,” which Ina May says in the movie. It means your body didn’t roll off some faulty factory line somewhere–there’s nothing inherently flawed with how it works, and the majority of our beautiful, impressive female bodies are capable of giving birth. Even if you run into complications in getting pregnant or in labor, its still important for us all to support each other, to take the fear out of it all.”

I could copy and paste that last sentence in everything I write for the rest of my life, but I will ALMOST digress.

Wigmore describes her film as the “portrait of a community,” and also as a “project out of love,” two incredibly accurate descriptions that I could not state better myself.

Birth Story: Ina May Gaskin & The Farm Midwives will be released in iTunes and on the website on April 30th.

I have learned that every time you have some success you can build on it for the next success.
And that’s really why you should never give up.