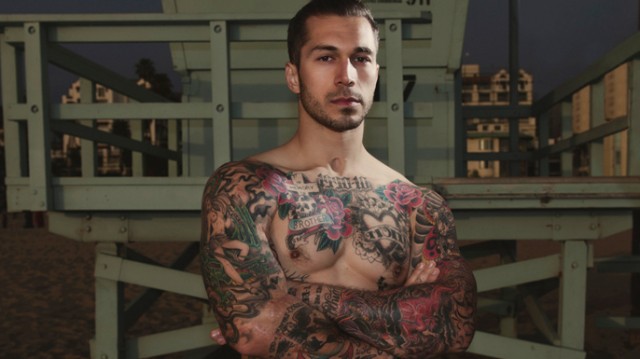 I am not perfect now nor have I ever been. I am growing, learning, moving forward in my journey and in exploration of this earth. Always striving to be perfect, but never achieving. Because I am human. –Alex Minsky

Nearly four years ago, a Humvee carrying a crew of young Marines forged its way through a long dirt road in Afghanistan. A scorching sun pushed the mercury quickly past the 100º mark. The tires’ deep tread kicked up clouds of fine dirt around the vehicle as it bobbed and weaved its heavy load through the rutted-out and dry path.

This was familiar routine for many of the seasoned men on the armored ride, except for one— Alex Minksy, who had been stationed in Afghanistan for only three weeks. His eyes were still adjusting to the harsh light that reflected off the arid landscape; he was learning to cope with the desert dust that seemed to creep its way into every aspect of a Marine’s life: food, clothes, nostrils, combat gear. His body was starting to acclimate to carrying his heavy gear in the unrelenting heat.

What he wasn’t prepared for was the IED that was buried beneath the drift of sand that lie ahead. Every person’s life on the vehicle would forever change the moment the weight detonated the bomb.

Alex doesn’t remember the explosion. He doesn’t remember sustaining massive, life-threatening injuries and burns that caused him to lie in a coma for almost 50 days. His physical trauma was extensive— his jaw was fragmented and stitched together with steel plates; the skin on his right arm had been peeled away by the impact. His brain had sustained level-three damage. What could not be repaired or rehabilitated was Alex’s right leg, which had been amputated below the knee.

When he woke up in the hospital, his mind wasn’t focused on the pain or what he had lost, but his fellow Marines. In an interview with Jay Leno on The Tonight Show, Alex recalled, “When I woke up, the first thing that went through my mind… how do I get through this? How do I get better? How do I get back into the field with my men, my Marines?”

Alex spent the next 18 months in the hospital recovering and learning to gain mobility and function—he had suffered memory loss, and attended therapy daily to learn to walk and speak again.

Tragically, less than two months after Alex left the Marines with an honorable discharge, his younger brother, Daniel, passed away. The weight of so much loss was tremendous. Alex turned to alcohol to escape and find temporary reprieve from the grief.

“I received several DUIs over a period of three months, where thankfully no one was hurt.” Alex admits, “I realized he needed help. I started getting honest with myself. I started taking suggestions, learned some humility, and began listening to the people around me. I’ve been sober ever since.”

Alex fought back instead of focusing on the emotional and physical pain. He immersed himself in a rigorous fitness routine at a gym in California where he was quickly discovered by a professional photographer. Photos of Alex’s chiseled and tattooed body, wearing nothing but his underwear, quickly garnered publicity. Less than a year after the launch of his modeling career, Alex Minsky has received national acclaim, and his strong physique, handsome smile, and inspiring story have captivated thousands of fans. However, this Purple Heart Marine doesn’t allow fame to cloud his perspective. Alex’s newfound modeling profession has brought him many endorsements, but he’s generous to share his successes. He donates much of the proceeds to the Semper Fi Fund and The Wounded Warrior Project, proving that his resiliency, charm and humble heart are what really set him apart. Alex, who inspires you and why?
My Mother and sisters because no matter what I have put them through they have always had my back and supported me.

Lying in a hospital bed for a year and a half, did you ever have doubts you’d recover?
I didn’t have doubts but others did because my prognosis was not very good. Through my determination to defy the odds I proved a lot people wrong. My motivation was the thought of going back to work and being with my fellow Marines again.

What’s the most important lesson you’ve learned about yourself, about others, through the recovery process?
(smiles) Don’t be a knucklehead and keep it simple.

There are people reading this article who are going through their own personal struggles. What advice would you give them?
I would tell them to learn from their mistakes but don’t dwell on the past and keep pushing forward one day at a time.

Your beautiful tattoos– they set you apart, and I know each one has a story behind them. Which tattoo/story do you treasure the most?
You are correct. They all have a special meaning, or sometimes more than one meaning. However, most of my upper body is about my brother and those are very special. Best moment in your life so far?
I’m rebuilding my life from the bottom up so everyday is a gift and a new exciting journey. I am always striving to be a better version of the old me.

What qualities makes a person strong?
Well, my first instinct is to say that of you could bench press as much heavy weight as (you) can. (laughs)
There are so many different ways to be strong physically, emotionally, spiritually. For me personally, true strength is learning to balance your strengths and weaknesses and make them work for you instead of against you.

If there’s one thing you want the reader’s to remember about you, what would it be?
I’m just a normal knucklehead that likes to work out a lot and stand around in his underwear. Seriously, I would like the readers to remember that when you are doing the right things even when you don’t want to, good things will happen.

Sarah is a creative manager by career, a designer + artist at heart. She's a freelance writer for Hello Giggles, Media Foam and The Conversation. A refined bohemian soul, she's a lover of classic literature and has a penchant for men who play the banjo, handwritten notes and hipster bands. Her specialty is throwing the ethnic curve. You can follow her posts on Twitter @boldface.

More From Sarah Neal view all