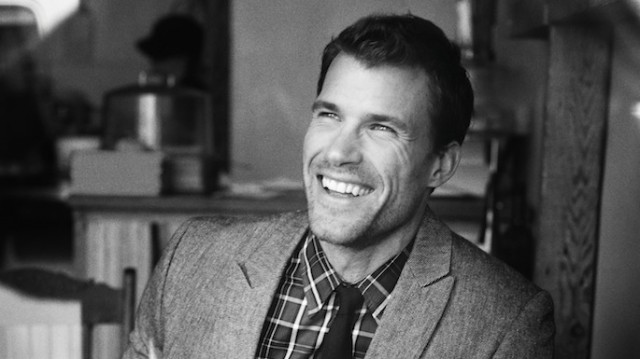 Lasse Larsen may appear to be an anomaly to many. Vegan. Model. Health advocate. Former reality star. Non-profiteer. World traveler. He has as many talents as he does aspirations to do good in the world. The more you get to know Lasse the more you realize that it’s the unique combination of his eclectic qualities and views on life that make him the man that he is today. A man we should all know and love.

What’s your life story in a twitter post?
“A simple dane, who after a whirlwind of experiences found myself in a place I never thought existed, and now I share it with everyone. “

What is your daily routine like?
(Laughter) I’m trying to have a routine. I’ve never really had a set routine because my life was always so spontaneous and fast moving. But I am starting to build something now. The closest thing I have to a routine is starting my day with some form of exercise, usually Tibetan yoga exercises called The 5 Tibetan Rites or the fountain of youth, I then I like to sit in meditation for at least 30 minutes, and afterwards I make a giant smoothie. How Did Your 90 Day My Vegan Journey Coaching Program come to be?
After working with with a company, that I co-founded, called Lux & Eco for the last few years and realizing that my time with it was coming to an end and simultaneously becoming aware that I had been semi-coaching people through their questions about life, relationships and plant based living for years I had this moment. I was sitting in a meditation and it all just came to me. What if I had this program where I invited people to work with me for 3 months and see what it was like to live in a plant based lifestyle, more consciously? Not just a vegan diet but thought wise, mind, body and spirit, a full 360 approach. This idea like many others I’ve had in my life just came to me and when I listen and follow through it seems like good things always happen! The next week I was sitting in meditation and more details came to me. “It’s 90 days. You will coach 3 – 4 people and it’s called My Vegan Journey. GO!”. So the very next week I posted a note on Facebook looking for participants, and the rest is history. What is your process for MVJ and how do you approach each participant?I help each person set an intention for themselves in the beginning. I do this so it can be a very powerful experience over the next 90 days. I work with each person to make the intention as deeply rooted as possible. We look at how to express the intention and then write it out. When we get to the root of the initial intention, which usually is more exterior focused, like losing weight, eating better etc, we come to to expressions like for instance being free or more at peace. The first weeks I listen and observe as much as possible to pinpoint the habits and tendencies that keep them in their current situation, and suggest exercises to become more aware of themselves and how they relate. I look for habits or thought patterns that may be getting in the way of future progress. As the journey unfolds, I keep watering the new thoughts, like maintaining a plant, and watch for destructive habits that may be creating excuses etc. My approach is simple but effective, and it sets roots deep in the individual that prepares them for life after My Vegan Journey. I believe that if you plant a seed, it will grow. It may take time, but it will grow. So my main focus is to plant seeds in the form of thoughts, ideas and exercises, that help them experience their own revelations. Its such a beautiful moment when someone lights up because they realized something about themselves, and watch how they and their world starts changing. Its priceless.

So, what’s with The Sexiest Non Profit Ever?
Again, I was ending a meditation and was thinking about some posts from Facebook where some people were talking about their desire to go vegan, but the total lack of fresh food around was a great challenge. These people were living in food deserts with little access to fresh produce. So I realized at that point it really didn’t matter how much great information I was posting for them, they had no way to apply it. I felt I needed to take some other kind of action. Around the same time I met another plant passionate vegan Lizanna who wanted to be involved with something that would make the world a better place. It was after this meeting it all came to me. I was given the name “The Sexiest Non Profit Ever” and I literally could not stop laughing. I thought that name, no way! But again, it came from my intuition so I trusted and went with it. The main mission with TSNPE is to eliminate food deserts and to make healthy the new sexy! For each item of apparel sold, we help create another community garden.

What advice would you give your 14 year old self?

Oh wow! Oh man, I mean… If I was a father talking to my 14 year old kid I would say, Things aren’t as important as you think. Learn to let go and not be so attached to outcomes. I would tell myself about the manifestation process. If you are out of alignment with what you want, you will receive lessons to teach you how to manifest what you want. Correct your thinking, and manifesting your desires becomes childs play. You can have anything you want. It’s all up to you. It’s a very simple process really. Having the desire for what you want, the belief that you can have, and the ability to let go of needing it. That’s something I would tell my 14 year old self.

What is your guilty pleasure?
How guilty? (laughs) I love vegan ice cream! Vegan treats. I have such a sweet tooth.

Do you have any hidden talents?
I used to ride a unicycle and I’m good on the stilts. Does that count?

What do you know for sure?
Ha! Ha! Ha! (Sidebar: Lasse laughts a lot!) I don’t know anything for sure but I trust that there is a greater force that is orchestrating everything! I have this deep knowing, like an inner voice, and I see it in effect all the time. The more I allow myself to trust it the more it reveals itself to me. What’s the most desirable quality in a woman?
Sense of self! Yeah! A woman that knows who she is. Not afraid to live it and has an irreverent abandon about her. Which means she is not looking for approval from anybody. She smiles just because she feels like smiling. There’s a humor and a freedom. That is so attractive to me!

What’s a big lesson you learned in your travels?
I realized something big in Nepal at a monastery I was living in a few years back. It was a night where I didn’t feel like sleeping so I stayed awake with my thoughts. I realized sleep, like many other things in life, is an addiction rather than a necessity. Rest is a necessity. I realized you can function well on short bouts of rest. I actually felt pretty amazing, and I was living on only hours of sleep during that time, and was able to do things physically that I didn’t think I could. There are so many things in our lives that we think are necessities but they are actually things we are simply addicted to. Food for example is also an addiction. We think we need huge quantities of it to live and really we are just trying to fill some kind of void. Breathing and water are absolute necessities in life. I realized that there are so few things in life I actually need and when I can let go of the expectations I’m good! Life’s good! Life is meant to be simple. I complicated my life thinking I needed all of these things. I keep reminding myself about these basic principles in my daily life.

What things are on the horizon for you?
The Caravan of Change is a big one. It’s the melding of My Vegan Journey and The Sexiest Non Profit Ever and like most good things in life it’s a collaborative or community effort. I joined forces with other like minded people, to create this movement for greater change in our community, and our missions are all the same and we are now going to go on the road in a classic Airstream to directly help a greater number of people change their lives. I feel when I get goose bumps after stating an idea, it tells me I’m on the right track, like a reminder from my higher self to stay alert to these signs. The project is so awesome, and I’m super excited about getting out and doing something like this. It will be such a trip, like no other.

What’s the one thing we can all do to make the world a better place?
(No pause, no laughter) Meditate! …and mediate some more. Now he laughs!

The biggest lesson I learned from Lasse from being a participant in My Vegan Journey, and a friend, is the art of letting go. How good it feels to shed the unnecessary weight of holding onto things for too long. We could all take a page out of Mr. Larsen’s life and the world would be better of!

To learn more about Lasse, My Vegan Journey, The Sexiest Non Profit Ever, or Caravan of Change: http://www.lasselarsen.me/

Ayesha Reynolds is a self proclaimed life long spark seeker. She has created a radical life for herself based on her empowering beliefs about life, LOVE, creativity, adventure, and spirit. By day she plans homespun weddings + events, by night her passion is helping people to live the BIGGEST most fun version of their lives. You can find out what her next big adventure is at The Spark Seeker. Follow her on Twitter @TheSparkSeeker.
comments (0)

People who are scared scare me. The scariest thing in the world to me is people who are afraid because they’re working out of fear.