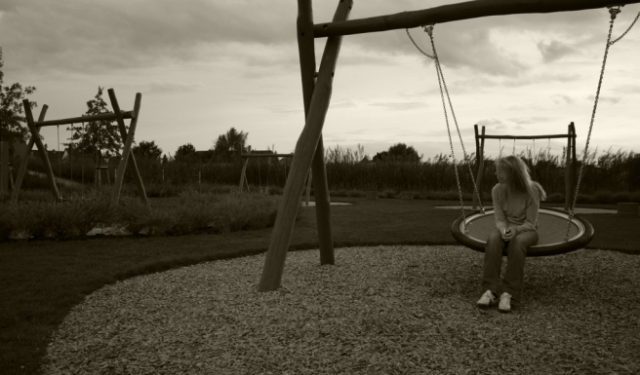 Portrait of a Woman

Who were you when you were 11 years old?

I’ve spent more than 30 years trying to return to the brash confidence and bursting creativity I effortlessly exuded at this age. In the year before my first menstrual cycle I painted voraciously, penned poems, and sang loudly along with the radio, without hesitation or embarrassment. I feared no man, and certainly, no boy. I imagined my life in a drafty attic in Paris someday, where I would mix oils on canvas, host amazing fetes for my fabulous friends, dine on whatever market fare I might procure for the day, speak French (duh), write acclaimed novels in my spare time, smoke long cigarettes (no dream is completely unmarred), and dress in designer duds — carefully covered up beneath my filthy paint smock, of course.

I grew boobs (rather unevenly). And hips. Sprouted acne and a chip on my shoulder. All that easy-to-summon bravado, before worn as a second skin, fell away like baby teeth, once an indistinguishable part of me, but now, something distinctly, and I believed irrevocably, lost.

(Why do we women lose ourselves for years, for decades? Why do we waste so much time?)

I never doubted myself before puberty hit. Yet I’m not here to simply blame boys — or my abject longing for them — as the reason for veering wildly off track. At least not the sole reason. There was something else: a sudden preoccupation with, and a veritable dread of, failure.

I became aware that though my light might shine, others inevitably shone brighter. Worse, some didn’t appreciate my light at all. Critics could outright mock it. This epiphany arrived with a cold slap in the seventh grade, when a group of girls overheard me sharing a bit of fiction with a friend. “Are you making up baby stories? Oh-my-God, you are!” they cracked up. Shamed, I dimmed my light a little that day. And when a pack of boys howled in my direction (barked, actually, with unmistakable woofs) —a few days later, it dimmed even further. And so on.

This fear of failing, of being outright rejected, hit me on all fronts. Like many girls, I took it out on my appearance. My hair, I suddenly realized, would not do at all. I permed it. I cut it. Anything to disguise its natural state, revealing the real me: wispy, mousy, dull, limp. I was blind to its innate shine and silkiness, first replacing it with a Brillo-pad frizz, then hack-sawing into asymmetrical submission. I bleached it, beat the life out of it and all in the misguided sense of self-improvement. I covered up my simple features with pancake foundation and raccoon-like eyeliner to create (I thought), the illusion of someone more exotic, someone who might be mistaken for pretty. I ate too much, then too little. I spun in all directions. My inner compass was pointing in every way but true north.

By the time I left for college I was thoroughly preoccupied with becoming someone else. I saw this as evolution. Maturing. Becoming a woman. I talked myself out of what I loved to do — making art, in particular — because it would not further my lot, and I needed to grow up, grow responsible, get a “real” job. I put down my color pastels, my paints. I wrote less for me, and more for others: applications, term papers, dull assignments with tough deadlines. I felt all along that I was burying something important, but I stifled that inner voice with reason: I had bills to pay. And, certainly, I did. But what about the other hours in the day, after I’d clocked out? What of the weekends?

I shunned what once made me me. And then, for a very long while, I forgot she ever existed. What I failed to understand was that my best self – my actual self – had fully blossomed by age 11. And that had I simply stuck with her, I’d have saved myself years of retracing my steps back to the girl who knew all along exactly who to be.

As I grow older, ironically, my younger self and I are becoming reacquainted. The person who so feared rejection had only succeeded in rejecting essential parts of herself. Maybe it took having two daughters of my own, the eldest now approaching double-digits, to remember all I’d lost.

It’s not just me who’s abandoned my best self, and it’s not just women in general, although I do notice it everywhere among my fellow females: how we spend hours in the gym, or jogging empty miles, in a futile attempt to whittle away whole parts of ourselves, as opposed to real time given to the garden or the studio or the writing room, to produce something new, something more. I see how huge chunks of our lives are offered up in the service of others, sometimes because so much is left to us, and how we frequently (always?) shortchange ourselves in the process. I see precious afternoons squandered on stupid frivolities: shoe shopping, hair foils, drugs to numb the pain.

(Why do we women lose ourselves for years, for decades? Why do we waste so much time?)

But what if we all simply reached back and invited our 11-year-old-selves to the present day? What if we welcomed her with a grin and asked, “My God! Where have you been?”

For me, the girl emerged last summer. For years I’d driven by a local art studio with a silent yearning: I want to go in…I want to go in. I’d catch a glimpse of the rows of steel easels standing like sentries and immediately guard my own thoughts. You’re too busy, I’d quickly override myself. And then, for good measure: You haven’t done it in years. You’ll be more than rusty – you’ll be bad.

But my 11-year-old self was anything but passive. She kept screaming at me. So, finally, on what I first imagined to be a whim but later understood to be an answer to a persistent inner pleading, I hesitantly signed up for a drawing class. I was embarrassed. I’d forgotten everything, even the basics like color theory. But embarrassment quickly fell away, just like those long-gone baby teeth. What overrode it was an undercurrent of joy. I felt so damn happy to be there, and to be making art again, that I forgot to care what anyone else thought. I found that the only opinion of my work that mattered was my own.

This small move — finally acknowledging whom I needed to be — snowballed in other ways. Inspired by my new-old direction, I found myself writing more, and not just to make a tough deadline. I taught my girls what I learned in class, and in the process altered their perception of their mother, and who she is, as a person. I laughed more with my husband, because everything around me felt lighter. I continued my education with another session and learned how to work with oils on canvas. And in the process, a clearer picture emerged — a more authentic self.

And so I ask again: Who were you when you were 11 years old?

Helping others is the best antidote for depression.