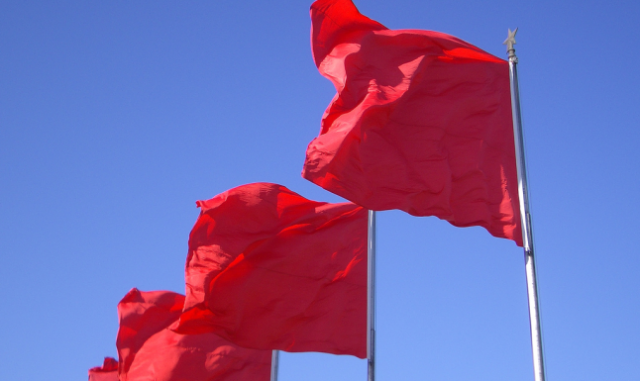 Red flags. Those annoying yet necessary little touchstones in life that guide us not toward, but away from things. The subtle prodding from the Universe that something’s not right. That gut feeling that you can’t QUITE put your finger on. Yes, red flags along our journey are very real, and whether we choose to heed them or ignore them determines where we end up.

A couple of years ago, where I hoped to end up was in the clasp of a romantic waltz with my super hot and deliciously younger dance instructor, who we’ll call Evan. As a child of the ’80s, I lost my heart to Patrick Swayze’s Johnny Castle at a young age, and my inner film geek longed to someday find a tall, dark, and dangerously handsome dance instructor to sweep me off my feet. At age 31, I took up ballroom dancing and developed an instant and intense crush on my instructor, Evan. He was lean, smooth, slightly mysterious…everything a fantasy dance instructor should be. We quickly struck up a flirtation that left me giddy to go to my weekly lessons. Slowly but surely, things progressed, and one night a few months after meeting him, we were headed out on our first official date.

The night of our first date, I was nervous, excited, expectant… all the ordinary emotions that encompass a first date with someone you really like. Little did I know, my emotions would about the ONLY ordinary thing that night…as a series of bizarre, random events began to unfold, literally as soon as I started getting ready for the date.

While in the shower, I gave my bottle of shower gel a light squeeze, aiming for my hand and somehow, a MASSIVE blob of shower gel shot backwards like a cannon out of the bottle and directly into my wide-open eye. I started screaming like a banshee, prompting my (male) roommate and best friend, Jason, to come streaking into the bathroom to see who was murdering me. “Are you okay?!” he bellowed over the gush of the water. “Yes!” I belted out, terrified he was about to rip open the shower curtain and attempt to perform CPR. “Yes, I’m fine, J. Now get out!!!” For the next hour, while trying to put on my makeup, my eye glowed bright crimson, almost as though I had been punched, rivaling even the reddest, well… red flag.

I managed to conceal most of the damage and went about my merry way, thinking surely – SURELY – the shower gel incident was just a fluke and the rest of the evening would go smoothly. Wrong.

Upon arriving at the lounge where we had agreed to meet (they had a great dance floor and we wanted to practice our moves), I waited expectantly for about 20 minutes, and still no Evan. Was he standing me up? After the Shower Gel Incident of 2010 that left me looking like I had a searing case of pink eye, now I was getting STOOD UP? It seemed too cruel. Thankfully, Evan came bounding in the door about a half hour after me, apologizing profusely. “I’m so sorry, baby. A skunk sprayed my car and I had to run it through the car wash. It REEKED!”

I bounced to my feet excitedly and made my way toward his outstretched arms… but just as I reached him, a girl who had knocked back a few too many tripped over her own feet and somehow the sharp 6-inch heel of her stiletto found its way to the soft skin on the top of my left foot…digging in mercilessly as I started shrieking in agony.

“OWWWWWWW!” I yelped. “I think she broke my foot!!!” Hopping up in down on one foot looking like I was doing “The Sprain” from that memorable episode of Saved By the Bell, I looked down to see blood gushing from my foot. Blood that rivaled even the reddest red of a – you guessed it – red flag.

I started to get a bit of an uneasy feeling as I hobbled to the bathroom to clean off my foot. For anyone keeping score so far, that’s 1) Shower Gel in the Eye 2) Late Date 3) Skunk Sprayed Car and 4) Possible Broken Foot. Was the Universe trying to tell me something? (As a side note, if you ever have to stop to ask yourself that…the answer is almost always YES.)

For the next hour, things seemed to improve. We shook our groove things, taking over the dance floor and having a ball. By the time we went out to the patio to take a break and catch our breath, I was feeling almost relaxed. It was going to be okay! Then, I looked over to the corner of the patio. Even though it was a random Wednesday night at the most obscure lounge in a three-state region, and even though he didn’t even LIVE in the town we were in, and even though I hadn’t laid eyes on him since we broke up, somehow my most recent ex had materialized out of thin air and directly into the middle of my first date with my next. And this wasn’t just ANY ex. This was my crazy, cheating, pathological liar of an ex.
And he was wearing a red shirt.

At this point, the Universe was practically banging me over the head.

Still, I persevered, determined to ignore the signs and have my dream date with my dream guy. The final stand came as Evan and I were whirling around the dance floor toward the end of the night. That was when the Universe decided it was going to MAKE me listen, by pulling out the Big Guns and one of its most effective tools: Sheer humiliation.

Although Evan was a professional dancer and had been for years, and although I had danced in high school and taken lessons and considered myself an accomplished dancer in my own right, somehow, some way, he went to twirl me around as he had done dozens of times before – only this time, I lost my footing, fell flat on my behind, and went sailing through his legs, ending up sprawled out in the middle of the dance floor in a most un-ladylike manner. Still, I leapt to my feet, refusing to give in to the inevitable truth. “Let’s try that again!”

This time, as I was midway through the turn, the button on Evan’s sleeve got completely raveled around a piece of my hair, and as he went to whip me around, the button took my hair with it, leaving me howling like a coon dog on a southern summer night, coming just short of ripping me bald. That was it. I was done. It was time to go home. I could suffer no more indignities for one night. Only the Universe wasn’t done with me yet.

As Evan was driving me in his Skunk-Mobile across the parking lot to my car, he looked over at me and winked. As we arrived at my car, he leaned over and kissed me on the cheek. He was so sweet and such a gentleman, I was practically swooning, thinking that maybe, just maybe, things were going to end on a positive note after all. That’s when he took both my hands in his, looked deep into my eyes… and asked for forty dollars. Yes. That actually happened.

Though he made up a litany of excuses for why he needed the money and why he couldn’t come up with it himself, it was pretty much the sketchiest move in first date history. And it was the final, final red flag that for the first time that night had me seeing red. Not at him. At myself, for ignoring the signs. And though I wouldn’t see Evan again after that night, he would continue to text me weird requests for money over the next few weeks, which would ultimately culminate in him asking me if I knew anyone who wanted to buy Xanax from him, as he was trying to “make a little extra money”. Since I have never ingested anything stronger than Benadryl, I couldn’t really help him out. Luckily, though – I could help myself.

This bizarre and all out CRAZY experience taught me the importance of heeding red flags. I firmly believe that God sends small rainstorms before He sends flash floods and small detours before He sends roadblocks. A red flag is just a stop sign waiting to happen, signaling a road that you’re not meant to go down. God and the Universe have our backs enough to SEND the signs, but it’s up to us to READ the signs. It takes only one stop sign for us to stop our cars – why does it take multiple red flags for us to halt a relationship? Though not all red flags are as glaringly obvious as the ones from my story, our gut and our instinct and our intuition inherently KNOWS when we need to proceed with caution, or stop entirely. So listen up when you hear that still, small voice. It might not always come in the form of a blob of shower gel or a skunk or a drug-pandering dance instructor – but even a slight hesitation is reason enough to stop, reevaluate the situation and ask yourself if you need to continue down the road we’re on, or turn back. Because ultimately, red flags are moments of hesitation that determine our destination.

Helping others is the best antidote for depression.