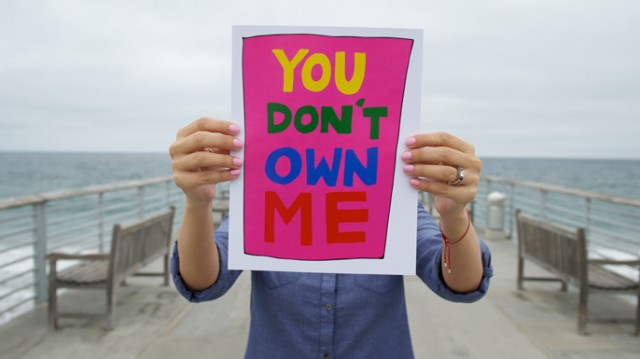 “You Don’t Own Me” PSA- Official from You Don't Own Me on Vimeo.

Women constitute more than half of the population. In 2008, 60% of voters were women. It is estimated that 10 million more women than men will vote in this election. Despite this, women make up only 16% of Congress. Women earn only 70 cents to each dollar men make. Women of color and undocumented women make less than white citizens. Mitt Romney and the Republican Party are determined to overturn Roe V. Wade. Romney has not supported equal pay for women (The Lily Ledbetter Fair Pay Act). Romney has vowed to defund Planned Parenthood. Romney has vowed to repeal the Affordable Care Act. Romney doesn’t want health care to cover birth control. Romney says same sex marriage should be banned with a Constitutional Amendment.

This election is shockingly close. Our safety is at stake. Our silence is consent and our vote is our voice. Let’s get active. Let’s get out every vote we can. Let’s make this election a mandate. A mandate to finally ensure women the respect, dignity and equality we all deserve! This is now. This is our call to action. Once and for all, let’s take back the power that is so inherently and naturally ours!