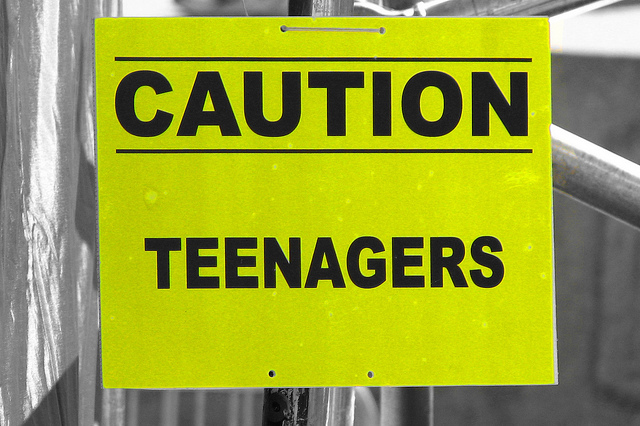 Something momentous and slightly disturbing is happening in my house and countless others around the world every day. It happened to me two years ago and two years before that, too, but this time it’s ever so slightly different and, like childbirth, I had hitherto forgotten the pain. You see, number three child is becoming a, oh I can hardly type the word! Okay, deep breath, here goes – a teenager. Yes, folks, I am the (mostly) proud owner of three teenagers now; a pink one and two blue ones.

It’s a strange phenomenon really and one that’s reserved, it would seem, merely for human development. This seems grossly unfair to me. I mean, what’s so special about a giraffe mother, for instance? She doesn’t have to tolerate slobbishness, mood swings, monstrous appetites, growth spurts and knuckle-dragging. Yes, I know giraffes don’t have knuckles, but you catch my drift. She doesn’t have to rise two hours early just to get a moment alone in the bathroom. She doesn’t have to decipher the muttered monosyllables that answer any question. Yes, in my next life I will be a giraffe. Until then though I am obliged to once again fully enjoy this interesting incarnation.

The teenage boy is vastly different to the teenage girl, in my experience, although both have developed their own naturally opposing opinions on everything, along with the inevitable all-consuming conviction that they are right! The thing that has made me laugh the most of late is their recent parent-teacher conferences. I don’t know what teachers do to teenage boys when they walk their hallowed halls and I am sure they’d have to kill me if they told me, so I won’t ask. Suffice to say that aforementioned knuckle-dragger becomes involved, helpful and a positive ray of sunshine upon entering the school hallway. Apparently he’s a delight to have around; an amiable clown; helpful to his peers; polite and genial with his teachers. Excuse me? The child who can’t pick up his pyjamas, clear the table without a summit on human rights, cut the grass without quoting child-labor statistics or help in any way without requesting vast amounts in payment is a delight?

I know it’s a necessary part of teenage to hide most of one’s best qualities from one’s parents. It’s also common for teenagers to believe that their mother and father never knew a moment of teenage angst or rebellion. So, of course, I’m faced with the thorny issue of just how much to tell them when they ask the inevitable questions. Would it be useful or instructive for them to know that I had my first cigarette at 10 years old; that I shared my first kiss, aged 11, with a boy called Johnny; that I ended up in the emergency room, aged 13, having consumed so much potent cider my liver was in mortal danger; that I lost my virginity at the same age my daughter is now? Eek!

Would it make them more able to open up if they knew just how flawed, impetuous and difficult I was at their ages or will it just let them assume they therefore have free passes to risky behaviors?

On the other hand, will not telling them give them some unrealistic ideal they couldn’t possibly attain? Would skating over or omitting past indiscretions and blatant, glaring mistakes lead them to think less of themselves when they, as they inevitably will, mess up?

I think I’ll go the honest route. After all, they’d know instinctively if I lied. Teenagers are clever that way and experience has taught me that one can’t share one bathroom in a family of five and keep secrets very easily! If they ask, I’ll answer, within reason and age appropriately, without omission or embellishment and just hope it keeps the invaluable channels of communication open. I will also, for all eternity, remain extremely happy and grateful that YouTube and Facebook didn’t exist in the eighties!

How am I going to keep my usual level of honesty ...

How am I going to keep my usual level of honesty and also be mindful that I am speaking to my daughter ?!! Repost from @atlantabean
•
For my last Quilt I’m having a very special guest come join me ~ I’ve taken you as far as I can and shared everything I know but it wouldn’t be a complete series if we didn’t cover one of the most important changes a woman’s body will go through - BODY AFTER BABY!! I’ve enlisted an EXPERT to share her experiences.

I always believe if you go on the path of truth and love and acceptance you can never be
wrong.