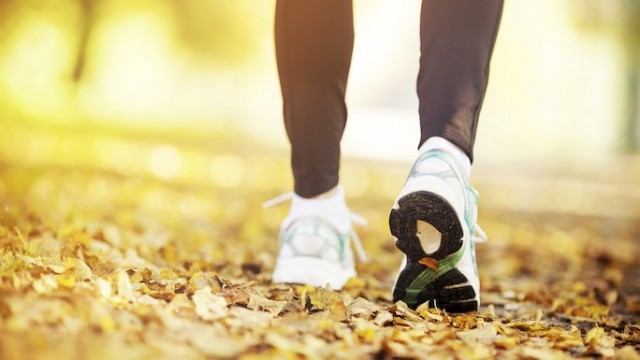 She maintained a brisk and focused pace. It felt like these moments were the only time that she took a literal step out of her swirling world and immersed herself in the fresh surroundings of air and natural elements. It was equal parts going within while being present enough to enjoy the outward. She was coming upon the tail end of her daily walk.

Her attention was waning. Her normal mode of operation was beginning to creep in, getting the next task done. What needs doing, doing it and checking it off the to do list made her feel most complete. This was never fully to her benefit. Being a doer had its flaws, namely the inevitable accompanied missing out on the ride, the journey, the enjoyment.

But, today, today was different. She began to slow her gait to a stroll. Her eyes peered at unusually present cars sitting in front of a large Tudor home. A couple people stood in the drive, a few others making their way to the front door. An open house, perhaps? She leaned in to see the sign more clearly. Estate Sale. A fancy struck her. How unlikely. This once she decided not to push it away but to succumb. It was a tiny thunderbolt of rebellion against her normal self.

Walking up to the front door, her curiosity grew to a substantial amount. What had initially piqued her interest now fully grasped it. She crossed the threshold to the beautiful home. She took in her surroundings. A large living room was first. Carpet and well made furniture stood before her. Stately. End tables. Floor standing vases. Upholstered chairs. Chaise lounge. Deep browns of mahogany. Brass glints. Rich, in color and in money. She walked to each piece, eyeing it, wondering where it came from, why it was here.

She entered the dining room. Purses and jewelry were set up. These were someone’s belongings. These were not just things. This was a home, a home of a person who no longer breathed in the air she just had just enjoyed on her walk. Heart pumping, ears thumping. This person was no more.

Two workers packed up gorgeous fragile dishes. They paired multiple of like kind, encouraging people to buy the set, not wanting to separate these new orphans from the same family. Some were scattered about, seemingly awaiting the embrace of their porcelain brother. She touched an exceptionally pretty bowl. Its cobalt blue and brown drawing her attention.

She swept through the disheveled kitchen. It was clear this was still untapped in the land of estate sale organization. Diner bar stools were askew. She noticed that they seemed a rather frivolous aesthetic given the other items in the home. They did not compare. They were an afterthought by the homeowner, a modern day purchase to liven up the chef’s quarters. She moved deftly out of the chaotic room towards the front of the home once more and up the stairs.

Her footsteps were slight and calculated as she climbed, not wanting to disturb. Disturb what exactly? She was unsure. It felt disrespectful to tromp through someone’s adored home. It felt right to treat it with reverence and attention. The spirit of life resided here, whether in the flesh or not.

At the top of the stairs, the foyer included built in bookshelves. Book after book tucked into a nook just for it. Each owned a personalized home within this grandiose structure. Her fingers slid over the old spines. Her mind wandered. Why was this book bought? When? By whom? Books are the teller of tales, not just in the words on their pages but in the times they were purchased. A gift by a friend. A self indulgence. A researched bit of information to share. An education. A cover that catches an eye. Each has a reason and, in this instance, a reason that would never be known. The humanity of it all brought a wave of emotion. This home, these books, this furniture was a complete life lived. She felt, for a moment, like a voyeur. She wanted nothing more than to show deference to the previous owner. It was morbid and sad and entirely intriguing.

She continued on. Entering a bedroom with two large closets. Clothes hung lazily from their hangers, a woman’s clothes. They had no one to prettify. Their job eluded them causing a desolate air. A brightly colored jacket stood out. Its attempt to brighten the room fell short. Had it been so when worn? Doubtful. A boxed wedding dress sat on the floor. What life was held in someone’s belongings! Our worldly possessions leave behind a small story of who we are. And this story was soon to be broken off and sold in pieces. She bent down to look into the face of that dress, the face that had once picked that dress out, worn that dress to bind a woman to the man she loved. As she stood slowly, each movement feeling like it counted, a shelf of small Ked like pairs of tennis shoes caught her eye. Where had they walked? Who had walked in them? She could only imagine the places, the miles, the history.

Her search continued, stepping down the hall and into a large guestroom with a bed frame so large and solidly made she knew it had to have been borne several decades before. She wondered what type of pillow talk had occurred, sleepless nights, babies made.

And so it went, through one last bedroom, the garden and the back guest house. Pieces of a home, pieces of a life. She was sad for this loss of a person she had never known. She thought of all the moments on the inside that we don’t ever get to see of each other. She thought of all the things we accumulate to make up our whole. The items we buy, the moments we live, the inevitability of our end.

She exited the home, back on her normal path. She walked slowly. She breathed deeply. She was content to gain the years, to experience the life ahead. She paid homage: to the ones no longer here, to the ones in her life, to those who were not and to herself. The next checkmark on that list had been forgotten. The rush of life has been stalled. She simply was. She simply lived.

It’s really important for people to always look at where they are, and understand that you can
change anything about your life at any moment if you really, really want to.