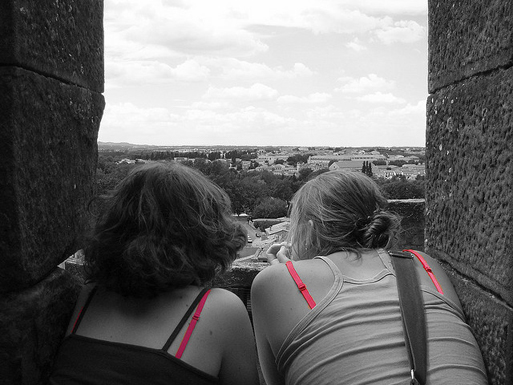 Sitting around with my relatives you can’t help, but hear military stories. They vary from funny to heart wrenching, but they all seem to to have one thing in common: A deep connection that will never be broken. Once you’ve dodged bullets with someone and put your life in their hands, and accepted their lives in yours there’s nothing really than can compete with that. I have heard it referred to before as many different things, but the name that sticks out is the Foxhole Mentality. The idea of being in the trenches with someone and covering them when they can’t cover themselves and being forced to fight a common enemy next to a stranger, will bond you like nothing else.

I am not a soldier, but I feel bonded like one. I feel like I have been in a Foxhole fighting a fight and I thought I was alone in there. It wasn’t until the chance of open honest conversation that I realized I had a war buddy in the trenches.

Anxiety has taken over my life for decades. I carry with me three Anxiety Disorders and the life that has been offered me has often been a war zone. I was confused and alone, or so I thought. After high school when you are finally allowed to stop pretending for the first time, I shared what I had been going through (such as intense symptoms and panic attacks) with a friend I had known since I was fourteen. I always thought if I told my inner thoughts I would get rejected or worse treated as a crazy person. Instead I got that exact opposite. She told me she has had similar events happen to her and like me it had been happening since childhood. We both felt the same pain that those around us couldn’t understand, of trying medications and having them disappoint us when they didn’t work, of having normal things upset us and the worst part was our bodies were not under any bit of our own control.

I have always compared telling people about my disorder like explaining colors to someone born blind. Here was someone I had known for years who knew this secret language and could understand the gibberish that had been running through my head for most of my life. She saw what I saw. I was in the trenches and it was if I looked over and I wasn’t alone I had a fellow soldier next to me and we could fight.

I cannot talk to anyone like I can to my friend. Every panic attack, every break down, every tremble and shake is understood by her as hers are by me. We have often referred to our conditions as going down the rabbit hole into a place we don’t understand much like Alice in Wonderland. It’s okay now though because there’s someone who’s been there before and they know the way out. I always feared that I would get lost in this world where I couldn’t make anyone understand. Someone does understand and we are always talking about what we can do to make sure that it isn’t for nothing. That our stories and our pain don’t go unnoticed. There is a reason for what we’ve been fighting for. We hope that further research can be done and my friend has personally become an advocate for mental health research. I am very proud of her.

I imagine that our war stories are nothing like literal soldiers, but down here in the Foxhole we have fought the good fight and we have to keep fighting. We are very grateful to have each other. When I can’t fight she covers me with support and I do the same thing when she thinks she can’t fight. We are a different kind of warrior. As long as we have each other and the strength we give each other we can fight this war, and hopefully one day get out of the Foxhole and tell our war stories. While we’re here she will never have to worry, she is not alone and neither am I. I must say I find more comfort in that than I can possibly express.

Tiffany is 27 years old and continuing her education so she can become an elementary school teacher. She's happily married since July 2011. She moves around the country for her husband's job so she finds work as a substitute teacher. Currently she resides in Kansas City, Missouri. She grew up in Michigan, home of the American car, and has a soft spot in her heart for classic cars since she watched them being restored her whole life. She has two dogs that she rescued and they are family at this point. She loves writing and has not stopped keeping a journal since she was ten. As a person living with three Anxiety Disorder, she is constantly trying to advocate for those she knows to be screened for any mental illness and get help. She would like to aid in ending the stigma around mental illness. It is not all that we are. You can follow Tiffany on Twitter @TiffanyBadal.

More From Tiffany Badal view all