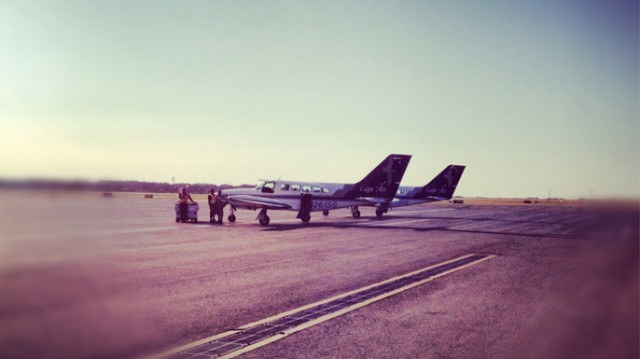 The plane that ferries travelers from the island of Nantucket to Boston, Massachusetts and back carries nine passengers and one pilot. It’s the type of plane that requires you to state your body weight before boarding and hovers at an altitude from which you can see the ground (or, more accurately, the water) the entire way. Just before seven on a sunny July morning, you hand your carry-on to the attendant, who places it in a cavernous leftwing compartment (no bags on board) and lie about your weight by two pounds (to lie by five might prove hazardous to your safety and to the safety of your fellow passengers). The engine is so loud it drowns out all other sounds, save the pilot’s confident voice (he does this several times a day) shouting cheerfully at you to “fasten your seatbelt.” You think of JFK Jr., probably because you’re reading a memoir by a woman who loved him and whom he loved. Or because you’re crossing waters a stone’s throw from where he passed. You think of Katharine Hepburn and Howard Hughes. How they treated planes like sports cars and managed to live relatively long lives. The speed is breathtaking, and before you know it, you’re airborne.

Hovering above the island, you get an extraordinary bird’s eye view. From this vantage point you see why maps look the way they do. The sun glistens on the water and illuminates the grey shingles and white trim of the houses dappling the land. Yachts and sailboats rest in the harbors, and waves kiss the rocky shores. Everywhere are green trees and bramble merged with stretches of sandy brown and swaths and inlets of brilliant blue. You’re the opposite of a sun worshipper; you much prefer the subtlety of grey to the glaring obviousness of the light. But this morning, the sun shines on the island in the most magnificent way and somehow charms you into liking it.

You mull over the concept of distance. Things appear glossy from a distance. When you’re immersed in them, places are flawed, real: you trip over a crevice between cobblestones, swat a mosquito from the mustard that’s fallen out of your sandwich and onto the table, and walk the dock where you first locked eyes with a stranger who became an intimate and then a stranger again. The place is more textured than smooth. But from a distance, you perceive none of this. What you see now is Nantucket’s avatar. Its profile picture. “I should Instagram this,” you think, instinctively. You already know which hashtags you’ll use (#ACK #nofilter). But then you remember your phone is in your carry-on, which is in the wing (#fail). And so instead of morphing into your avatar and sharing the island’s avatar with a community of avatars, you must remain human and sit in the radical solitude of your own perception. You have neither an electronic facsimile of this moment nor the validation of an audience “liking” it. You have only its fleetingness. That and the nervous tapping of your left foot (#private #kinetic #NotIdealForPhotoSharing).

The plane tilts and turns. It leans toward the water and then dips back to neutral. You feel everything on a plane like this. Louder and bumpier than its larger counterpart, the tiny plane (that’s its technical name) personalizes the experience of flying in a way that is as terrifying as it is beautiful. Lumbering commercial jets are the Walmarts of the sky: noise-controlled, Febreze-scented, futuristic public living rooms with personal televisions, plastic-wrapped snacks and scant discussion of how it all came to be. The nine-passenger prop plane, meanwhile, gives you an experience akin to that of raising and slaughtering a chicken; it necessarily reminds you of what, exactly, you’re doing. There’s nothing veiled or sanitized about it.

“This isn’t actually scary,” you tell yourself, as you hit turbulence and your heart skips a beat. “What am I afraid of? Falling out of the sky? I’m only afraid of falling out of the sky because I’ve been taught that fear.” Like when you watch too much Law & Order: SVU before bed and stare warily out your bedroom window, half expecting a pair of bloodthirsty eyes to be gazing back at you. Suggestibility can be dangerous if not channeled mindfully. You consider how a small child or first-time flier would react to this flight. She would likely regard it with wonder and amazement – the way you regarded love before you knew heartbreak, drink before you knew excess, or Santa before you knew doubt. The plane rocks from side to side, the pilot remaining unfazed. “I’m not scared of a boat rocking in water,” you reason. “Water has waves, and waves rock boats, and a rocking boat is totally normal.” Ergo, “This is only harrowing because I think it’s harrowing.” Somehow, the repetition of, “This is fun!” puts you at ease and enables you to become exhilarated by the bumps and sways. You wonder how you’d fare if you applied this logic to other aspects of your life: work, relationships, money, overall purpose. Rather than tensing up or projecting danger, why not relax, ride with it and enjoy the metaphorical bumps and sways? The smug simplicity of this parallel makes you hate yourself a little.

Ah, self-loathing! A top-ten (maybe even top five) bump-slash-sway in the bougie life of the 21st century urbanite. A journalist for a Canadian newspaper once wrote of the admirable novelist Zadie Smith that her works present “an aggressive repudiation of the effete ‘Hampstead novel’ that dwells on the lives and loves of North London’s more privileged inhabitants.”*

As this springs to mind, you hope passionately that you have not fallen into the American equivalent of said category. You have more grit than that, right? You are the everywoman. And flying – even if from a luxurious vacation destination – elicits thoughts like this in everyone, right? Yours are valid concerns. And just as the contemplation of your own effeteness threatens to render you even more effete than you were moments ago, you spot land and feel the way the Plymouth Colony Pilgrims must have. The sight of the shore blesses the voyager with a certain amnesia regarding the challenges of the journey. “How was the flight?” Amazing.

You deplane and, as it is a tiny plane, traverse the tarmac on foot in the manner of Maverick and Iceman. Sunglasses feel so right in this moment. Carry-on now in hand, you hastily fish out your phone so that you can sneak a shot of the aircraft before it exits your field of vision forever. You snap the photo. Meh. It’ll need a filter. The light is different now.

And so this: the island, the ocean, the heartbreaking beauty of the moment, accidental reflections, a memory of a man long forgotten, hopes and fears, wanderlust, and the messy vulnerability of your abject fear, all summed up in a sexy wide shot of a prop plane with an X-pro II filter, blurred edges and enhanced brightness. It immediately gets sixteen “likes” – which you deem a respectable number for someone whose Instagram is private. A sure sign that the trip was worth it. And that it happened.

Brooke Lyons is an actress and writer based in Los Angeles. A classically trained ballet dancer, Brooke was diagnosed with scoliosis as a teenager. Eager to raise awareness for this debilitating spinal disorder, she founded the Scoliosis Association of Southern Connecticut and authored the book Scoliosis: Ascending the Curve (M. Evans and Co., 1999) before enrolling at Yale, where she received her B.A. in English Literature. Brooke's television roles include American Dreams, That's So Raven, The Starter Wife, Desperate Housewives, Law & Order, Jane By Design, 2 Broke Girls, Royal Pains and Psych. Film roles include Welcome Home, Roscoe Jenkins and The American Mall. Brooke is also a contributor at HelloGiggles and Move LifeStyle. Read more at her official website and on Twitter.

More From Brooke Lyons view all

Keep your integrity. Remain true to yourself.