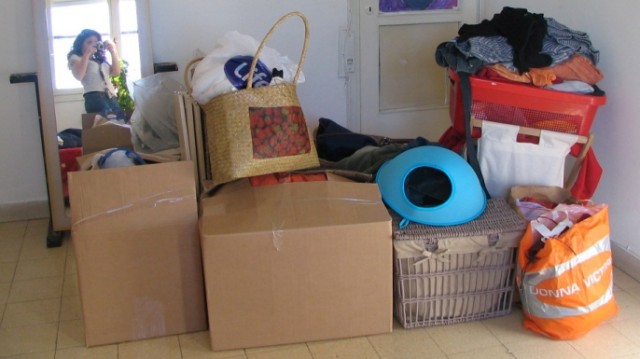 I used to really want to settle down. Senior year of college, when everyone else was picking new cities to move to based on jobs or whims or whatever they wanted, I was determined to get a job in the same city my boyfriend was going to grad school in. I was on the planning committee for Senior Ball, and it was my flimsy excuse to fantasize about wedding planning. When I moved out to California, I drooled over the real estate section in the paper, dreaming of a perfectly decorated house with two perfect kids. My friends were out drinking, dating, having fun and I felt so over that scene. I had found the perfect person, I was done with all that, I just wanted to live out my happily ever after. At least that’s what I told myself.

Looking back on it, I think I just told myself that because the other option scared me. Making decisions is difficult and terrifying. It was so much easier to stick with what I had – a steady job and a reliable boyfriend in a city I didn’t love, but that had great weather and plenty of things to do. It didn’t matter that I felt ‘meh’ about my job, extremely ‘meh’ about all of my friends and secretly just a little dissatisfied with everything. I had stuff that was good enough. Getting more would have required work and uncertainty and all kinds of things I just wasn’t ready for.

Luckily for me, life jolted me out of that rut in the form of a nine month business trip to the other side of the country and a roguishly charming and handsome co-worker who made me realize all the things I’d been missing in my current relationship. Unfortunately, I was still in ‘settle down and make do’ mode, so instead of enjoying the new relationship for what it was, I immediately set about trying to turn myself into this man’s wife. Looking back on it, I have no idea why I was so desperate to play house at the now infantile-seeming age of 23. Unshockingly, this guy did not appreciate being marriage-tracked, and felt like he was just being shoved into a role that anyone with certain qualities would have fit. Things did not work out.

So things ended. I did the things you do – I drank, I stayed out too late, I cried a lot. I backslid, I went on terrible dates with guys from the internet, I finally hooked up with that one guy I’d never been single at the same time as. And when none of that proved fruitful or satisfying, I picked up my life and I moved it to the other side of the country.

It wasn’t until I moved that I realized what a freedom it was to have the ability to do so. I’ve moved a lot, so it’s never really seemed like a big deal to me (aside from the first time, when I was ten and it felt like the end of the world). People were always happy for me, but they were generally also shocked (isn’t that a big change?) or jealous (I wish I could, but I have this long list of commitments that keeps me here). Suddenly, I was very appreciative of how freeing it is to have not settled down. To not have a house to sell, a partner whose job prospects have to be considered, kids would have to change schools. I have myself, my clothes and some furniture that’s pretty old and I’m no longer that attached to. The world suddenly feels like my oyster, and it’s pretty amazing. I’m finally doing all those things my friends were doing a few years ago – going out, making new friends, having fun, not knowing what’s next – while they’re settling down and getting serious boyfriends and husbands. I feel like a little kid when I go to visit and stay in chicly decorated guest bedrooms.

The thing about settling down is that inherently, it always involves settling. I hope that some day, when I’ve grown up a little, it won’t feel like that anymore. But for now, I don’t want anything that’s good enough. I want a job that thrills me, I want to live in a city I love. For the first time in my life, everything in my life is about me and only me – sure, that’s selfish, but this is the time to be selfish. I’m finally not afraid to want all those things I was scared to want years ago, and I’m ready to do whatever it takes to get them.

Samantha Barnes is an engineer by day and an aspiring writer by night. She hopes to help put a human on Mars and a woman in the White House in her lifetime.

More From Samantha Barnes view all

A part of me would just die inside if I ever heard my little girl talking about her body in a mean way.