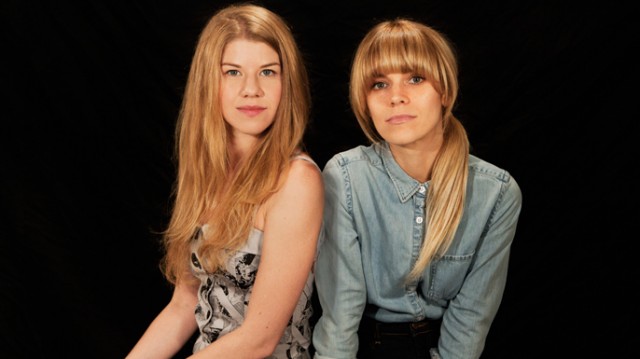 A Conversation Between Sisters Alex And Vanessa Prager

I’ve been inspired by Alex Prager’s work for some time and watched her steady climb to hard-earned recognition over the last three years. Her talented sister Vanessa has also been making exceptional art and I’m just blown away by how special they both are.

I asked Alex to interview Vanessa the week of her art show opening, which I’m honored to host. If you live in the area please come by!

Here is a glimpse into the minds of these two extremely talented young women:

When did you have your first exhibit, and how soon was it after you started drawing?
I’ve been in some group shows pretty early on, that I sold some stuff at. Probably when I was 19, so that was eight years ago. Shockingly. But I wasn’t really doing it, and I wasn’t painting at the time. It wasn’t anything like what I’m doing now. I was doing it, but it was for fun.

How did it make you feel [when you sold your work for the first time]?
Cool. Just because I liked doing it, and I liked that other people agreed with me. But it was something valuable, it held value to somebody else besides just me. Do you think your work changed when we moved in together? Or was it too early on to tell?
It didn’t change directly then, because all I was drawing was copies of things- I was literally just copying. When I was in high school I was copying models from perfume ads, trying to learn how to draw, so it wasn’t very creative at that point. I mean it was in the sense that it felt nice and everything, but there was no direct change. I wanted so badly to be able to draw from memory, and I knew I wouldn’t be able to do that until I could draw for real. So it was all about that for years. Why did you think it was possible to be an artist for a living?
Yeah, it definitely helped [seeing you become an artist]. I mean it was cool to see you doing it for a living because you were five years older. In my formative years, I was just like, this is a way of life, so it came naturally to me. As opposed to, I’ve talked to many people since then and a lot of them are trying to figure out how to get into art and I never got into anything else. Immediately, the moment we moved into together, it was just like, you were doing that and that’s what I am doing, too. So I never got into a day job and had to figure out how to get out of that and into art. It was natural.

What struggles did you see me going through, that you wanted to avoid? Or did you just accept that I went through those struggles and that was just how it was and you needed to prepare yourself?
There was a point when I really started going for it. I hit a certain point in my 20s and I was done – just over being young. I wanted to be really into it and be in control. So I remember switching into high gear then, And I kind of thought it would be a lot easier. I definitely thought, I always felt that way. It’s so weird because all the struggles dissipate after a year, so you kind of forget about them. But I remember going through all the not knowing what is going to happen to you…

Like in the middle of a series or the response the audience will give you?
In the middle of making a career for yourself, like making up a job. And whether or not it’s going to work out. But in that sense, I knew I was in for the same struggle as you just because you always told me, if you keep it up it’s going to work out. I remember just diving in and wanting to get messy with the whole thing. Because It was more painful to me to think I’m not, doing something like that. Are you scared? Now that we aren’t living together?
No, not at all.

Are you excited? Looking forward to it?
I would say the good and bad feelings I feel outweigh each other, because they are so strong. But you’re going to be two blocks away, so I just land on that and I’m okay with it. But as far as the art goes, in the past I would have be much more devastated. Just because like I said, it can be such a lonely thing. But at this point in my life, I’m so secure in what I’m doing as an artist, that it’s not so scary. How do you make the transition, from being part-time artist and doing other odd jobs, to finally deciding to be a full time artist?
I tried it once, I only had part time jobs, so it was never as hard as it could have been, which I did on purpose. But it was always minimal other work for my entire adult life. I don’t know- I had to leave whatever architect I was assisting at that time, but I tried to have no job then, and it didn’t work out, so I had to get one more job right at the end. And I was really bummed out because I had gone for it, in my mind I had made the decision at that point – I was 24 at the time – and it didn’t work out. I had to get another job and I just freaked. I remember having that last job and the intensity of wanting to [be an artist] full time was so strong that it just became overwhelming. And although it was scary as fuck, I remember I just did it. I was 25 and went for it; I literally just jumped. It was scary. I probably felt like I was dying for a few months.

How did you know it was going to work?
I didn’t know, I really really did not know. But what I did know was that I was in a really weird place in my life, I was just like now or never. I’m either going to go for this, or I’m not going to go for this. And I can’t NOT go for this, because it’s not who I am. I can’t live with that. How did you know that painting was the thing for you?
I liked it, I had a natural talent for it. I was just more interested in that than a lot of other things. I did a lot of things when I was a teenager.

How do you keep drawing and painting interesting things all these years later?
I used to not want to repeat myself within my own patterns. It’s not like that anymore- I’m always striving to get better. There are things within the medium, or within the craft, that you find as little challenges, and I’m always going for those. If you could collaborate with me on anything what would it look like?
I have no idea. It’s a mystery to me! Which makes it so exciting! I don’t know…

Then what advice would you have for young women that are trying to be professional painters?
Just do it and master it. Be good at it. And that’s about it, passion and skill is pretty much all you need.

Be sure to follow these amazing sisters on Twitter: @VanessaPrager and @AlexPrager.
Photo courtesy of Tyler Parker