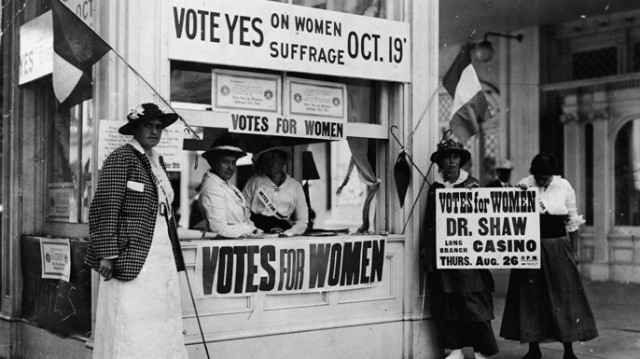 Old stereotypes do die hard. My being a feminist does not (necessarily) make me a lesbian. Or a granola-eating Wiccan. Or a motherless career gal. Or an atheist. (Although I would never malign any of these groups; to each her own.) Or a man-hater, or even just angry and strident (most of the time, anyway). It means I stand passionately for equality. I resist gender discrimination, violence, and subordination, whenever and wherever I encounter such wrongs.

Which makes me the more encompassing term, a “humanist,” I think. But I haven’t always said so, not even in such a roundabout way. Only recently have I come outright and yelled, “F,” yeah!” to anyone who’d listen.

Growing up in the 1970s with a Ms. Magazine-reading mother who was, in fact, a bit strident and angry— these were the post- Mad Men years; she had a right to be pissed— I both absorbed her belligerent indignation and was wary of it, too. It’s true that I did wear a “59¢” button on my wide plaid lapel to school in the fifth grade, explaining to my teacher and any kid who’d listen that women, on average, earned just 59¢ to a man’s dollar for the exact same work, and how unfair was that? But my nervousness grew exponentially with my sprouting breasts. While Mom was drunk with her newfound freedoms—divorced, dating, going back to school, working—and uppity toward any soul brave enough to decry them, I fought a creeping ambivalence.

In fact, as the ‘80s dawned along with my teen years, I became downright afraid of being identified with Gloria Steinem and her ilk. While considered almost sexy a decade before, this tribe of bra burners now symbolized something else: something hairy, militant and repellent, if you listened to the snarky whispering among the boys in P.E. class, or the popular sentiment espoused on everything from sitcoms to cereal ads.

Somewhere along the line feminism— even uttering the word— became taboo among Gen X women like myself. A very few of us (I’m not among them) fully embraced the term as twenty-somethings, dutifully reminding others that the Equal Rights Amendment never
actually passed, that our wages capped somewhere around 77¢ on the dollar ratio, that violence in entertainment was increasingly targeting women and girls with frightening depravity, and that the media was scrutinizing the female form with ever-more hostile and extreme language: scary skinny vs. beached whale. (It appears we gals either suffer from eating-slash-mental disorders, or are total pigs. Our normal, curvy bodies can never be just that. And few question why such an unhealthy preoccupation with our physiques has became the mainstream status quo.)

But many, many more Gen X women darted away from feminism as they would a party guest with nasty death-breath. Occasionally we might accept a softened qualifier like post-feminism, which evoked a post-apocalyptic, post-wartime ethos, and subtly suggested a wiser and less edgy evolution of women’s initial folly into fighting for equal rights, air time, and pay. We dutifully worshipped the early-‘90s Madonna and her wink-wink, pointy cone bras. And we read with ironic appreciation girl-power publications like Sassy and its heir apparent Jane, skimmed through Bitch, and maybe bookmarked websites like Jezebel. But few in my generation wore (or now wear) their feminism proudly like a badge. We laugh at Naomi Wolf’s book titles, too, and openly snicker at women’s studies courses right along with the lads. We want in on the joke.

Maybe some of us were (are) afraid, and want it both ways. We worried we’d turn off the guys. Be branded a lesbian. Get fewer dates. And threaten the finally stilled, gender-battled waters by stirring up some waves again. So instead, many of us talk about how we were raised to be anything, go anywhere, and chase any dream. We flaunt how much for granted we take our growing opportunities and shrinking discriminations. And we consider yesterday’s struggles for emancipation firmly in our collective rear view mirror, as antiquated as a Cadillac with tail fins, even as we shun our latchkey roots and re-embrace trends like stay-at-home motherhood. We do all of this, all the while knowing firsthand from our own mothers’ personal anecdotes just how closely we came to being born a tad too early to fully exercise control over our own female lives.

Some would argue we’ve merely exercised our expanding choices and reveled in our options, a position with which I’d agree. But I also think we dropped the ball. Big time.

In our aversion/avoidance of the “F” word, I fear we’ve done ourselves (and our younger sisters) a disservice, my demographic born after 1965 and before 1980. Now, as a fresh crop of twenty- and thirty-something women assume the mantle of leadership in the world, I’m beginning to understand how cavalier we’ve been. If Gen X women are complacent about all our mothers and grandmothers fought so valiantly for, it’s shocking to realize how many Gen Y and Millennial women are in complete denial about how recent these wars were actually won. Not all but many live in the metaphoric dark, like the second generation born after the end of the Enlightenment.

Modern women in droves make sprawling assumptions about the permanence of their equality, access to healthcare and reproductive freedoms, and physical safety to such a breathtaking degree, it almost makes me choke. History lesson: The FDA approved the birth control pill in 1963; the year 2012 saw politicians in league with the Catholic Church proposing the ban of several forms of contraceptives. Just ten years after The Pill prevailed, Roe v. Wade became the law of the land. The latter occurred in my lifetime; I was six years old in 1973. Back-alley abortions and unnecessary deaths of desperate young women are quite literally less than a generation removed from me. That’s a moment in time, ladies; the pen hasn’t even dried on the legal ink yet. And we all know there are plenty of folks who’d like to erase it, as if it were written in pencil.

Last Tuesday’s round of federal and statewide elections brought this fact into clear focus. They reframed and forced our national discourse during the last year or two, and in my view revived a fading feminist pulse. As conservative and liberal factions duked it out in the media and on social networks—and the debate was often fiery among women themselves of varying economic, educational, and generational backgrounds— I felt my own latent “F” factor kick up into full gear. Like a mama lion defending her cubs, I was suddenly ready to bare teeth toward anyone who tried to take away my rights, or tell me this defensive instinct was all in my pretty little head.

And, of course, there was the slam-dunk 18% gender gap in the presidential election, a 6% uptick from 2008. Women were a driving force, if not the driving force, behind basketball-loving Barack Obama winning a second term, despite his drop off in support among men and independents.

This is where I give the air a celebratory fist pump. Feminism is to be cheered as a champion. Because when our mostly male lawmakers were recently holding all-male, religious-driven panels on whether or not women should have access to contraceptives, plus suggesting legal changes in how to fund and make available women’s access to healthcare, defining rape and how any woman can individually respond to such a violent act, how much (and even whether) to value a woman’s life when compared to that of a fetus in the womb, and how much autonomy to grant to any woman over her own personhood, all while voting against equal pay for equal work, women spoke in numbers. Through their votes they shouted: “WAIT A SECOND! NOT SO FAST!”

Whatever you think of these highly charged issues—and the majority of Americans still believe politicians and criminal courts don’t belong anywhere near the bedroom or inside a doctor’s office—it’s imperative to never forget that women were beaten, jailed and died for our legal rights. To vote. To be heard. To control our own bodies and futures. To gain access to education. To break the glass ceiling. To earn equal pay for equal work. To not be controlled by over-reaching paternalistic forces.

To be considered equal, on every front. Women like my mother and hers, and the women who walked before them.

What’s the lesson here? If you are a humanist- no, a feminist, then say so. Out loud. In public. To your girlfriends— and, “F” it!— to your guy friends, too. Don’t assume your rights are set into stone. You don’t have to be as brave as the 15-year-old girl in Pakistan who was recently shot and nearly killed by the Taliban for blogging about her desire for an education, and for being gutsy enough to go to school despite receiving ongoing death threats.

So stand up and be heard. Don’t be complacent. Speak your mind. You do not have nasty death-breath, I promise you. No one will run. Except, maybe, a few more wannabe female politicians, that is.

Feminism, after all, is a fucking fantastic thing.

The Feminine Mistake by Leslie Bennetts

Eff it. I’m going to say it: I’m a Feminist. With a capital “F.” Old stereotypes do die hard. My being a feminist does not (necessarily) make me a lesbian. Or a granola-eating Wiccan. Or a motherless ...