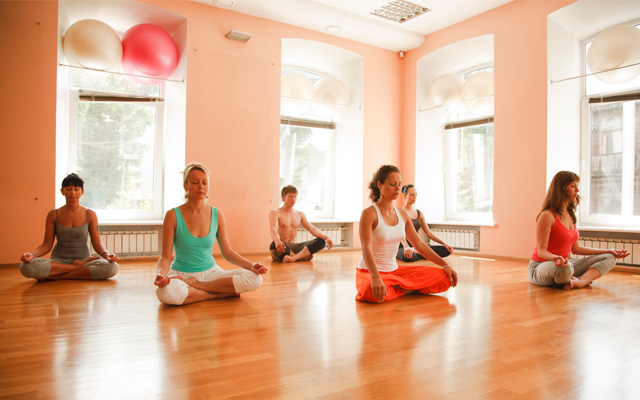 Beauty Is All Around Us. Are You Looking in the Right Places?

I’m pretty much the worst at yoga. For one thing, it’s decidedly un-yoga-like of me to consider myself the worst at anything. I’m pretty sure that’s against the rules.

My failings as a yogini aren’t based on physical limitations or shortcomings. My vinyasas actually aren’t half bad and I have what some might consider freakishly flexible hip joints (which I realize sounds like an attribute one might advertise in an online dating profile). But unless I’m mistaken, compassion and patience are crucial to the yoga practice, and I’ve never had much of either—for myself.

When I started attending regular yoga classes about seven years ago, my teacher happened to be a tall, statuesque blonde with supermodel cheekbones and subtly sculpted muscles. For a new student struggling to accept her own body, Renee’s stunning looks were hard to ignore. And watching her seemingly float through the studio, entirely comfortable in her own soft, blemish-free skin could sometimes incite envy.

But then she instructed us to close our eyes.

Every Sunday morning, Renee’s 90-minute beginner’s class provided a safe haven from self-generated body snarking. It turns out it’s much harder to criticize the size of your stomach when you’re not staring at it in a mirror or coveting the flat abs of a nearby classmate. It’s also harder to hate your thighs when they’re responsible for keeping you upright during a one-legged balancing posture.

Renee never stopped encouraging us to feel the poses and truly appreciate what our bodies were capable of, not what they looked like. Hers just happened to look a little like Heidi Klum’s. But that fact started to matter less and less as I continued attending her classes, getting used to the sound of her fully-belly laughs, melodic “oms,” and endless stream of encouraging words.

She never hesitated to share her history with students, telling us she’d been overweight, survived dark times and low points, but had found peace and solace in yoga. She was inspirational to say the least—and a little infuriating to novice yoginis. She radiated calm, wise energy from a picture-perfect, model-esque package she could contort into crazy arm balances. It was hard not to break the no-peeking rule and enviously sneak a glance at her tranquil glow while wobbling through a twist or inversion.

Renee got sick in 2010. She was diagnosed with Stage 4 Breast Cancer with mestasis in her liver, lungs and lymph nodes. She was 29.

After a three-year battle that she chronicled through video updates and blog posts, Renee passed away in April. We weren’t close friends, but the loss felt devastating. I was sad to lose a mentor, but even more troubled to think the world would now be void of her specific blend of tenacity, kindness, and undeniable beauty.

We live in an alarmingly superficial society. And even those of us who preach the importance of body-positive self-love can crumble into hypocrisy when confronted with US Weekly’s best beach bodies. Losing Renee reminded me that all the energy we expend chasing arbitrary beauty standards isn’t just exhausting—it’s meaningless. We get so caught up coveting the impossibly long legs of cover models or cursing the cellulite in the mirror that we forget how incredibly fragile and temporary our bodies are. Try as we might to fix what we deem to be imperfections, our bodies aren’t machines. They get sick, they age, they break. And the more time we focus on what they look like, the less we appreciate what they do, how they feel, and how lucky we are to have them.

A few weeks after Renee passed away, Angelia Jolie wrote a New York Times Op-Ed about her decision to undergo a double mastectomy. It sent shockwaves through the blogosphere and the entertainment world, but maybe for the wrong reasons. Angelina—an actress, mother, humanitarian—is arguably still better known for her breathtaking beauty than for her talent, skill, intellect, or compassion.

Many commentators couldn’t help but wonder aloud how this decision to alter her body might impact her career. Some speculated how the move might delay her much-hyped wedding to Brad Pitt. Jokes about Jolie’s breasts flooded Twitter. Of course there were (thankfully) stories focused on how the public announcement might impact the health of women across the world, but so many reports were sidetracked by Angelina’s renowned looks. It was startling to see the confusion her choice caused—not because it was a controversial, extreme preventative measure, but because many assumed it might jeopardize her idyllic beauty.

Losing Renee and reflecting on the aftermath of Angelina’s Op-Ed reminded me of someone else who’d unknowingly influenced my ideas around the importance and irrelevance of body image. Jessica Lum was a former classmate, a brilliant journalist, and someone I watched track the progression of cancer via social media. She was frequently funny, often thoughtful, always honest. She snapped pictures from her hospital bed, including one of a guilt-free treat: “I am going to eat this small stack of Oreos, no regrets,” she captioned one photo.

But one message Jessica sent out to her social network seriously stuck with me:

September 6, 2012 – “RAHHGH, self esteem rant: I am shocked at how many (beautiful, intelligent!) women in their mid-twenties are revealing the body image insecurity I would have thought was more common amongst 16-year-olds who just discovered what bulimia means. LADIES: STOP complaining about your weight. Stop comparing yourself to starving models (they all cry themselves to sleep and want to eat cake but can’t; it’s tragic, really). Stop comparing yourself to your undergrad selves (I know, I miss my undergrad body too, but she had more time to run and swim — but remember, she’d still get lapped by little old ladies). You are a unique flower, beautiful no matter what people say etc. etc. and you know you’re better than that. Stop harping on details like dieting, caloric intake and the fact that you drop pounds when you smoke. Just be healthy, feel better, and you will feel better about yourself. Own your bodies. Stop complaining. You KNOW this.”

People like Jessica are one in a million. But reminders to love our bodies as they are are everywhere. We’re just too often distracted by society’s warped beauty standards and our own critical self-talk to see them. So when my friend told me today that the fit, focused woman in her spin class stepped off the bike to reveal a prosthetic leg this morning, I wasn’t surprised. The world is filled with so many variations of beauty that have nothing to do with a number on a scale, the presence or absence of stretch marks, the size or shape of any one asset. We’re conditioned to believe our “body image” represents how we think we look, but wouldn’t it be great if we could redefine the term to embody how we feel, what we imagine we’re capable of, and how much compassion we can have toward ourselves?

I’m still stumbling into hypocrisy while encouraging others to reappropriate the body image dialogue. But I’m doing it while attending as many yoga classes I can. And I can feel the other students’ beauty all around me, even with my eyes closed.

Michelle Konstantinovsky is a freelance journalist, UC Berkeley Graduate School of Journalism alumna, and an avid admirer of shiny objects and preteen entertainment. It would be nice if you visited her website:  www.michellekmedia.com.  Also, she may learn to use Twitter more effectively if you follow her @michellekmedia.

More From Michelle Konstantinovsky view all

There’s a lot of shame around postpartum. Why aren’t people talking about it? What is the stigma? And as long as we’re not talking about it, the stigmas will still exist and we will be keeping women in silence about things that are really hurting them and their families.