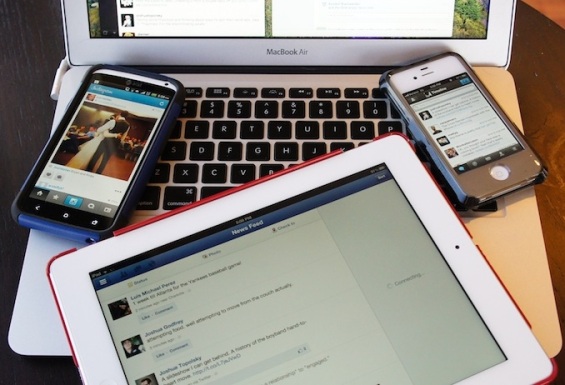 Are we a generation that is enslaved by technology?

I am guilty of it, you are guilty of it. We are all guilty of it; the inane, constant checking of smart phones, the perpetual updating, sharing, clicking and the constant beeping.

Yes, I use Facebook, Twitter, Tumblr, eBay and hotmail dutifully – perhaps too dutifully. Yet lately I have begun to notice our collective lack of focus. We chat online while watching TV or watch a film while finishing homework. It appears are unable to focus on one task anymore without the interruption of gadgets.

Recently I was in a room full with six friends, five of them being generation Y; four were fiddling with phones while having a group conversation.

We’ve all been the irksome situation of being out with a friend and having them fidget and peek at their phone while conversing or ‘enjoying’ the company of a friend. Our social etiquette is changing but is it for the better? Can we have a night out, without letting hundreds know our whereabouts or what our meal looks like?

The quandary is our overload of information and realising that it is a social and cultural problem. Research by the University of Chicago Booth School of Business, concluded that urges to check networking sites were hardest to resist, with alcohol and tobacco rating lower levels of desire Also, according to research by Onlineeducation.net, 38% of surveyed students can’t last longer than 10 minutes without checking electronic devices.

Do we all seek that dopamine rush when the little red notification symbol pops up? Are we validated by them? Do we feel a brief sense of importance, which we chase? Similarly with dating, we are almost able to conduct police checks on possible suitors even before a date. Only a few years ago it was a faux pas to break-up with someone via phone, but that little rule appears irrelevant now.

Do we remember the days of letters being the only tool for communication, apart from the house phone? Remember the anticipation of them and their personal and private touch? How much mystery is left in our lives? Can we still relish solitude? Are we still able to get to know people by asking questions and talking in person, or do we check their ‘likes’ tab? Or is choosing privacy and shunning social networking synonymous with being out of the loop? Furthermore, once we are so accustomed to broadcasting our lives and sharing our every whim, are we able to give up that audience?

Research from technology firm TeleNav has discovered that 40% of participating Americans who gave up technology for 24 hours felt lonely without the internet. 53% felt irate about being deprived of their gadgets. A similar study by the University of Maryland, conducted on technology-loving students, displayed that students showed ‘withdrawal-like’ symptoms following the 24-hour technology ban. One student even reported feeling ‘dead’ during the blackout.

So how can we free ourselves from the electronic chokehold?

We should not impose a ban on technology just to prove a point. Instead we should try and recognise compulsive habits and try and alter them.

Set time limits, organise Facebook free nights and think about the things you could be doing instead of trolling aimlessly on whichever site. Read a book, they are ‘gardens in your pocket,’ ask questions verbally instead of Googling queries. There is no magic pill; the answer is always will-power. Finally, brace yourself to attempt a technology free day and contemplate the words of Gertrude Stein: “Everybody gets so much information all day long that they lose their common sense.”

This is what frustrates me so about our educational system. We learn reading, writing and arithmetic, but not living.