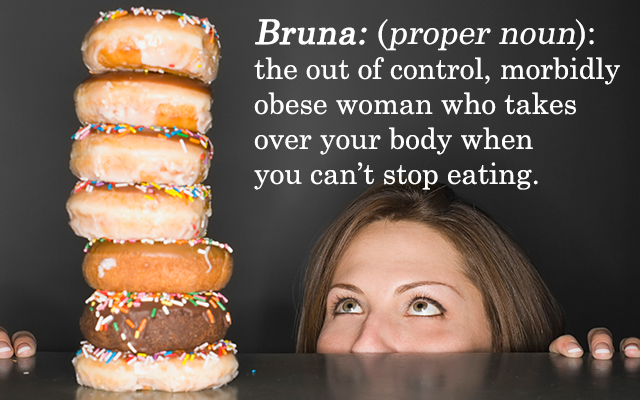 How to Stop Hating and Embrace Your Body

I found myself lying on my dad’s living room floor after eating all of the stale candy, non-fat cookies, hummus, airline snack mix and every other food I could find in his sad bachelor cupboards. It was four years ago. I had just moved to Los Angeles and was feeling normal human feelings, but instead of feeling them, I ate them. All of them. I ate everything except the mustard that expired in ’88. After you force that much crap into your body, the poor system begins to shut down. And then, heart racing, belly ready to burst, the guilt sets in, “Why the HELL did you just do that?” I didn’t have an answer that day. I never did. I just knew that once Bruna arrived, I didn’t stand a chance. Bruna is what my friend Gina and I call the out of control, morbidly obese woman who takes over your body when you can’t stop eating. She signifies absolute shame and hideousness.

I met Bruna for the first time when I was 13. Oddly enough, I discovered this food-obsessed crazy woman who lived inside me, after deciding to be skinny and HOTT. It was the summer before high school and I remember thinking, “OK, so how about I go on a diet, work out a lot, look like one of the “Friends” girls, or one of the “Ally McBeal” girls, or really any girl on TV, and just own high school?? Duh. Best idea ever, Heidi!”

I stopped eating anything that had fat in it, ate very little of anything else, and voila! My poor, young body began to disappear. And oh boy was I a hit! Adults I hadn’t seen in a while were so proud of me, “Heidi you look great! Looks like someone lost their baby fat!” Yep! I lost all of my baby fat, and then went ahead and lost myself completely. It felt great, until very quickly it didn’t. I was starving, and cranky and angry all the time. I went on vacation with my family, and when everyone else ordered dessert, I sat salivating while my body went into survival mode.

Until that day four years ago when I found myself sprawled on my dad’s carpet and I said, “GET ME OFF this goddamn roller coaster!” I crawled over to his computer and googled something like, “For the love of all that is good and holy, help me, Google!!!” The first thing that popped up was Geneen Roth’s book Breaking Free from Emotional Eating. The title horrified me. I hated admitting that I needed to break free from anything, but I was desperate.

All of that insanity started with the simple decision to go on a completely unnecessary diet when I was 13. In her book My Life So Far Jane Fonda writes about the way she betrayed her body when she turned 13.

“That’s when I moved “outside” myself full-time, and a perpetual, low-grade anxiety took up residence in the newly empty inside space… Before that summer, at age 13, the concept of ‘perfect’ hadn’t yet begun to darken my horizon— I was too busy climbing trees and wrestling. Now, on it came.”

Yes! That’s what I did! As I’ve stopped feeling ashamed of my own experience and started talking and listening to others, I’ve realized just how many women, and men for that matter, struggle with “perfect.” So now when anyone tells me they’re going on a diet, my anxiety levels skyrocket and I scream, “DON’T DO IT!!! Listen to your body! Eat foods that make your body feel good! Don’t be so hard on yourself! Breathe!” Then I force them to read all of Geneen Roth’s books.

I met Geneen Roth at a book signing a couple of years ago. I knew we’d be best pals, so I asked if I could interview her right then and there for a video. She said no and politely moved on to the next person in line. I think what she was trying to say is that listening to your body is important, but so are boundaries.

It’s still difficult for me to talk openly about any of this, but I know hearing others talk about their struggles helped me heal. I think honesty is one of the best ways to help future generations avoid the doomed pursuit of perfection. So that eventually, turning 13 will always mean the beginning of womanhood, not the denial of it.

Heidi is a writer, comedy performer and video producer, but secretly hopes to interpretive dance and lip sync for a living. Originally from Missoula, Montana, she moved to Portland, Oregon after college to be a morning TV news writer/producer. While endlessly writing about 7-11 robberies, meth busts, and bunny hoarders at 1:00 AM was fun, she ultimately gave it up when she made the decision to do everything that scared her. Since moving to Los Angeles in 2009, she has performed and produced stand-up, improv and sketch comedy all over the city, and has performed at The Bridgetown Comedy Festival. She studied improv and writing at Upright Citizens Brigade, Improv Olympic, and in Portland at Curious Comedy Theater and The Brody Theater. Heidi is currently producing a video series featuring stand-up comics telling funny AND meaningful stories. You can follow her on Twitter @heidahay.

More From Heidi Hayward view all

Bravery is just in existing and coming out the other side.