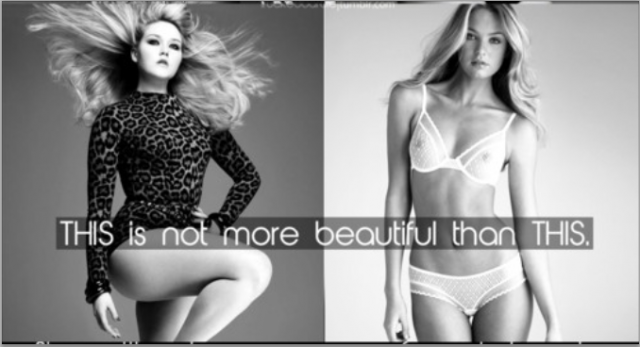 The month of January means a lot of different things to people: old relationships can be cast away or given a new lease of life as we set the goal of finding that all-consuming real Love, or come to realise that we already have it. We cover our bodies in nicotine patches in the hope of quitting smoking; we take up driving lessons, new hobbies and new ventures. But the resolution that women unfailingly flock to year in, year out, is tied up in those extra few pounds we see reflected back in the mirror. Yes, January not only signals a New Year but new diets, new neuroses and a “new you”. The scent of freshly-bought trainers hangs in the air at the gym, an influx of self-help books fly off the shelves and fad diets are employed with scant regard for long term effectiveness or the health of our bodies. Here’s a thought: It takes more than maple syrup, cabbage soup or carb-burning pills to fuel it.

Those little dimples near your bum, the crinkles around your thighs, the few seconds it takes your arm to stop wobbling with wild abandon if you hail a cab – these are all things that you’re told need to be “fixed”. As little girls, we’re taught that our most powerful form of currency is our appearance. We play with make up, dress up in our mom’s shoes, preen and primp our Barbie dolls and are rewarded by being told that we’re “pretty” above anything else, as if that’s all we need to offer. This leads to a life of being looked at under the spotlight of other women and the narrow constraints of the male gaze. Our bodies are to be experienced and consumed by others, our beauty measured by pre-set standards and increasingly something we are detached from and alien to rather than something we ourselves possess. We experience our bodies through the perception of others. A diet only pays off if someone comments on how much weight we’ve lost.

The weight paradigm is nothing new but is perpetually constricted in what it preaches to women. Since a fixed turning point in the 1990s, of course, the fixation has been on waif-like beauty, on thin hips and impossible height. The time of Renaissance goddesses, divine in their glorious flesh, Monroe’s curves as the collective ideal, even Sophie Dahl’s wide eyed voluptuous wiggle are all footnotes in the history of Our Bodies. Botticelli’s Venus would be told to shave off half her body weight in a fashion standard where size 8 (US size 4) is now considered curvy and the likes of Daisy Lowe and Lara Stone are its ambassadors. When these are the standards held up to women as an aspiration – indeed, seen by teenage girls as inspirational – it’s no wonder we fall in on ourselves, criticise and berate ourselves, hide the scales, binge and purge, know chocolate as “naughty”, are tied up in notions of the forbidden and feast only on guilt, self disregard and disgust.

For girls like me, it’s a different story. I didn’t start my period until I was 15 and quietly rejoiced, safe in the knowledge that the soft voluptuousness most of my female friends had achieved would soon be gifted to me by Mother Nature. Turns out she was a little stingy about it and until the age of around 21, from the neck down you could probably have mistaken me for a boy, albeit a boy who had inherited the wrong set of genitalia. But here’s the thing – I didn’t care. I embraced my straight-up-and-down-ness. My concept of beauty had been informed by fashion for long enough to know that androgyny is a wonderful thing, that a boyish frame can look kick ass in a tux, that I could get away with wearing pretty much whatever the hell I wanted, that I could dress for myself and never have to face the politics of looking as if I was pandering to men. Now, I’ve filled out a little and my metabolism’s increasing lack of effort means that any weight gain gives me a little content-looking roll of fat on my belly but I am still a naturally very slim woman who hovers around the lower end of the BMI chart.

I’ve left behind the days of the crippling female condition that is body dysmorphia, dropped the neuroses and got on with it. If I eat junk, I put weight on and it’s as simple as that. I would never starve myself and I would never let it affect how I dress or how I hold myself. Reading Susie Orbach’s Fat is a Feminist Issue, originally published in 1978 but more relevant than ever, finally led me to the female personal Mecca that is Security and Self-Esteem and maybe a little deliberate willpower to overcome the Anna Wintour-endorsed hatred of any flesh that is potentially dimpled or abundant enough to grab a handful of it.

Either way, I don’t know quite what it was that got me here but it’s vital that more females do the same. My perception of myself and of other women is informed by understanding, admiration and appreciation. I adore skinny girls, slim girls, tyre-round-the-belly girls, flat-chested girls, full-bosomed girls, fat-bottomed girls, couldn’t-put-a-pound-on-if-they-tried girls and everyone in between. There is beauty in every single female body-and every female brain – and none should be viewed with jealousy or suspicion. Of course, the fashion industry is relentlessly slow on the uptake with this and the campaign for a wider scope of female beauty and body shapes has been fought from ever corner and from every reasonable person. Fashion despises Fat and all the Mark Fast catwalk shows, Marc Jacobs sample-size-busting initiatives and the likes of one-off Italian Vogue covers or the recent Plus Model magazine shoot – comprised of plus sized and “straight sized” models posing together – haven’t changed that yet. The “curvy” girl is still a token figure. That battle goes on, but there’s another one that goes under the radar.

I learned as a teenager that outside of fashion, the skinny girl is reviled in favour of the “Real Woman”. Alas, the exclusive “Real Women” club is one I’ll never belong to. Apparently, to qualify, you need to have curves, to have child bearing hips, traffic stopping tits and junk in the trunk. I possess none of these things so I have to assume I’ve merely been posturing this whole time. I am a fraud and a liar and I apologise to womankind and to the Real Women for thinking I am one of them. Regularly I was told that “Real Women” existed, that “Real Women” were pear shapes, apple shapes, hourglass and never ever boyish or slim. I was told that men overwhelmingly preferred these “Real Women” and that this should matter to me as if male approval led to self-affirmation, as if male preference ought to be the thing that afforded me my confidence. This attitude is incredibly self-loathing, female-loathing and absolutely hypocritical. It’s as poisonous as couture’s hatred of all that is shapely and detrimental to female self-esteem. Some women assume that a fatter body size is the norm and anybody who’s a size 8 or under must starve/be miserable/suffer from anorexia, and must be told to “eat a burger” or responded to with a raised eyebrow in response to professed insecurity.

If I was somebody less secure then, thanks to the way some women think about me – and aren’t afraid to tell me outright – I’d be a quivering wreck. Thankfully, I know that their distrust, jealousy and bitterness towards females is borne from the mainstream media and that it’s only self-esteem issues that lead to inclination towards competition with other women and only ignorance that makes some women think every skinny person is on the infamous “Race to Size Zero”.

As women, we need to recognise that the media is feeding us bullshit on a daily basis. In the media’s eyes, there is NO female body which could ever be regarded as absolutely perfect because a woman is always too fat or too thin. We need to remember that those curves the media praise on the likes of Christina Hendricks are unattainable for most of us, that Kate Moss’ whippet-thin shape just isn’t going to happen. And so what? A thin body frame isn’t unhealthy, a fat one isn’t either. As long as a woman is free of food hang-ups, happy within her own beautiful skin and comes to appreciate her real self worth outside of her physicality, then who am I to say what she should look like? If we don’t let it go, then the multibillion dollar diet industry is the only winner. Diets don’t liberate women, only restrain us. It’s called body fascism for a reason and it’s time to change how we police ourselves and each other. It’s time to switch the resolutions for a revolution.

Emma Smith is a 24 year old woman living in a town in the north east of England. She is a feminist, music obsessive, budding film buff and fashion maven, but of course, that's not the whole story. She doesn't think it's beyond anyone to change the world for the better, one word at a time. Follow her on twitter @GrrlStyleNow.

More From Emma Smith view all

The social constructs that people create for women are too hard to live up to.