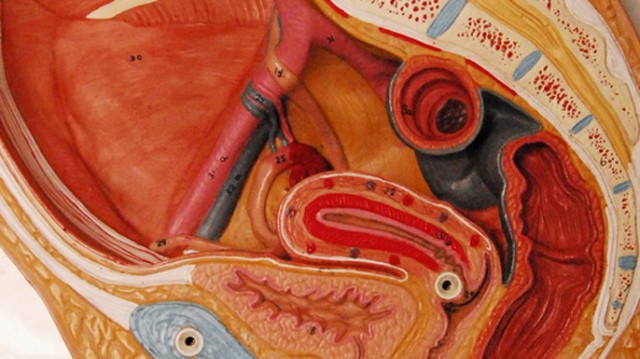 Never TMI: How Speaking Up Could Help Your Health

I’ve never loved going to the gynecologist. Showing a stranger my most intimate bits? No, thanks. But when I started having some serious female issues, it became clear that WebMD was not going to cut it anymore. My mom had terrible struggles with endometriosis and suggested that my issues might be endometriosis-related, too. In simple terms, endometriosis is when the lining of the uterus begins to grow on other parts of your body (your intestines, bowels, etc.) and if left untreated, can cause infertility. It’s also extremely painful. The Endometriosis Foundation of America says that 176 million women worldwide have the disease. After more research, I realized that the bad cramps, irregular periods and pain during sex that I was experiencing were all huge indicators of endometriosis.

It was time to stop ignoring the problem.

I was a sophomore in college when I got my diagnosis. I originally went to a nurse practitioner who told me to wait until I wanted to get pregnant to deal with whatever issue I was having. Little did she know that many times when women do this, pregnancy is no longer an option. That’s how endometriosis works. It grows aggressively and causes infertility while you’re still trying to figure out why your period is so irregular or painful. I didn’t know any of this at the time, so I just nodded my head and was on my way. My mom was not okay with this news. Before I even knew what had happened, she had forced me to make another appointment with my gynecologist. A few weeks later, I was back in the same office explaining my symptoms to the doctor.

“Well, I get these random pinches and pains in my side. Um…I have really bad cramps when I get my period. My lower back hurts. Um…”

He looked at me.

Come on, why can’t he just ask me if it hurts when I have sex? I really have to say it?

“And it really hurts when I have sex,” I blurted out.

I felt uncomfortable saying that last part out loud. I know people have sex. That’s how the human race continues. But I’d like to keep that part of my life private – I’d be a really bad Kardashian. After the discussion with the doctor, I felt flustered yet relieved. I’d just had an awkward conversation, but I was finally going to get some answers. I ended up having a laparoscopic surgery, which is the only real way to diagnose endometriosis. It turns out that I did have the disease, but my case wasn’t very advanced. I was lucky to have caught it early. This wouldn’t have happened if my mom hadn’t pushed me to go back for another opinion.

During the first surgery, the doctor was able to remove a good portion of the endometriosis from my body, but there were some areas he wasn’t able to reach. To try to get rid of the rest, I did a series of hormone shots called Lupron. The shots stop estrogen production in your body, which can help slow development of endometriosis. They also made me feel like I was going through menopause. I had hot flashes, mood swings, the whole bit. My family and friends will tell you I was a real joy to be around during that time. But the Incredible Hulk-like moodiness was worth it because the shots and surgery did provide temporary relief from my endometriosis pain.

After about a year, my symptoms came back. Endometriosis is like cancer in the sense that it can grow back. Eventually my mom found the name of an endometriosis specialist in New York City. I should mention that my mom is an expert at Google. If you need some sort of weird gadget or hard-to-find book, my mom will locate it. My gynecologist was well-educated in dealing with endometriosis, but that was just a small part of his practice. Now that my endometriosis was persisting, it was time to find someone who spent all day treating endometriosis.

I went for a few consultations and exams with the specialist in New York City and after some thought, I decided to schedule the surgery. The procedure was called a deep excision laparoscopy, and it meant that the doctor was able to reach areas that had previously not been treated during surgery. Only a handful of surgeons in the world are trained in this technique. I had talked to patients who had the procedure and they all raved about the results.

I had the surgery in September of 2011 and it was life-changing. The doctor removed all of the endometriosis that was in my body. He also took out my appendix, which was inflamed and causing complications. There’s nothing I love more than a good “two for one” special. The recovery from the surgery was slower than my last, and my mom and I had to spend the week in a studio apartment in New York City. Needless to say, we got to know each other really well. But it was worth it. I am now completely pain-free.

Finding a solution in three years is rare for most women with endometriosis, so I consider myself lucky. Many women are in their thirties when they are diagnosed with endometriosis. That means years of suffering without an answer and then more suffering as they try to find a treatment plan. Endometriosis has always struck me as a “quiet” disease. Had my mom not been diagnosed, I probably wouldn’t have known that I had it. The symptoms can easily be confused for typical “female issues”. My endometriosis is not something that I used to talk about, but once I became more open I realized that I knew a bunch of people who also had it. Being open about it has made me feel much more relaxed, and being aggressive about getting treatment (instead of waiting five or ten years) has changed my whole quality of life.

Going in to your doctor and talking about things you only feel comfortable sharing with your best friend after a few drinks, is certainly not the most appealing idea. But it’s absolutely worth it if it can lead to a solution after weeks, months or even years of confusion and discomfort. If you’re looking for more information about endometriosis, check out the Endometriosis Foundation of America‘s website.

Lauren Levine is a 2010 graduate of Syracuse University. She writes a blog about post-college life called Life with Lauren, and also documents her experiences with endometriosis on her blog The Endo Files.  Lauren contributes to several other sites, including USA Today College, Glass Heel, and The College Crush. When she's not writing, she's probably playing guitar (poorly) or trying to find a way to work out without feeling like she's exercising. She loves iced coffee, entrepreneurs, Bethenny Frankel, a good inspirational quote, and almost anything on the E! Network.

More From Lauren Levine view all

I didn’t learn manners, I didn’t learn anything. I was so self-taught that I didn’t want to make a
mistake, which I think helped me a lot in my traveling and in my cultural experience. So many
people tend to just have their own way of being.