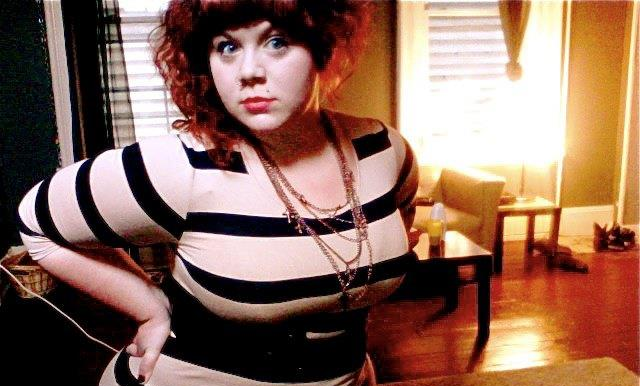 I’ve reclaimed the word fat. Yeah, I did. Weird, right? Not really. It’s not a bad word to me anymore. Well, I guess sometimes it is, but we’ll get into that later. You can call me fat however much you want, and it won’t hurt me. It may actually be a good thing. How did I come to this inner revolution? I’ve lived my whole life under scrutiny all because of my body and I was tired of it.

I’m beyond exhausted with the fact that people who aren’t necessarily doctors diagnose me with illnesses just because of my weight. I’ve had people assume that I’m diabetic. Just because of someone’s weight and appearance, they are deemed to be a certain health. A thin person could eat McDonald’s four or five times a week, shoot up heroin and be considered healthy just because they are of thin stature. All the while, I’m a fat girl who eats her three meals a day, walks a decent amount at school, eats tons of veggies and very little fast food but I’m unhealthy because I’m fat.

I’ve had people tell me to lose weight while I was shopping for clothes. Shoppers and workers have always looked at me weird while I’m shopping in straight sized stores. I once asked a sales associate if they had any bigger sizes in the back of a certain dress that I fell in love with and she spewed out that they don’t carry “those bigger sizes” because they don’t have the clientele for it. Who am I? I’m clientele, as are many other women who are too afraid to go into stores like that because of the way that we are treated. I also tried to sell some of my clothes to a second-hand store and was told that they could only buy one of my scarves because they also do not “have the clientele” for the plus-sized clothing.

I’m tired of watching television and not seeing anyone like me because our society wants to shove the idea of thin down everyone’s throats. It’s very irritating to see commercial after commercial about a new weight loss pill, a new diet where a company sends you prepackaged, preserved food in the mail, right to your door! Now we even have cheese commercials gloating about how their slices are THIN!

Fat shaming even goes beyond social discomforts; it can also have economic consequences. Did you hear about the hospital in Texas that went without hiring people who were of a high BMI, while hiring people of a very low BMI that is also considered by our health organizations as being unhealthy? How is that not discriminating against fat people? Just make us go away, right? I’m not going anywhere.

I’ve started interviewing people about this topic, trying to figure out what it is that they think about it. The most recent interviewee said, “I prefer body acceptance. Fat is just a piece of a person. It’s a grouping of a certain type of cells. You wouldn’t necessarily say muscle-fiber acceptance if you had bulky-legs,” and I completely get it. I do. But I’m torn. Fat is a part of me, but I also claim myself as being fat, so it is – in a sense – me. I also think it’s more complicated than that – and of course it is, why wouldn’t it be?

In our culture, bodies are shamed constantly. Bodies of all types are scrutinized, but what is the one body type that is mostly stigmatized? Fat bodies. How many times do we see a magazine cover where a celebrity is being shamed for their size, then it’s released a few days later that the celebrity is actually like, a size 2 or something? How often do we see the “OH MY GOD SO AND SO IS PREGNANT LOOK AT THAT BABY BUMP!” and it’s completely ridiculous because there’s practically nothing there? This means that average or normal sized bodies are no longer normalized. They are fat in the eyes of our advertisers, popular culture and in turn, the eyes of our people.

It doesn’t just stop with our country, though; studies have shown that America’s advertising, TV shows, and movies have caused higher rates of eating disorders overseas, even in countries where bigger bodies are considered (or, well, used to be considered) more beautiful than thin bodies. If average sized bodies are becoming fat to our culture, then thin bodies are in turn average-sized and it’s this terrible wave that just keeps going down and down until a size 000000 is what’s considered normal.

The fact that fat people have a horrible shopping experience, the fact that fat people are discriminated against in trying to find jobs and the fact that our society’s view of what size is normal is why I believe the issue IS fat acceptance. Yes, I believe that everyone should accept their bodies and love themselves, but the issue isn’t of the BODY only. It’s of our society finding just an ounce of fat on someone and saying that they are disgusting and unhealthy as an afterthought. It’s our society saying that a, say, Zumba instructor can’t be fat. It’s our country saying that a woman is pregnant because she has a pooch.

This has to change or our women (and increasingly, our men) are going to dwindle to nothing. Not just our adults, but also our children. This is affecting more people than we all think, more people than I can probably even imagine. This isn’t about fat versus thin, or us versus them. This isn’t some sort of war. We have to stand up and love our bodies the way that they are, and work to improve the health of our bodies, not just be as thin as we possibly can be. We have to support and help each other, help our fellow women love themselves no matter what they look like. Can we do it? I know that we can!

Cortnie Owens is a current Women’s, Gender and Sexuality Studies student in Cincinnati while also working in Social Media & Web Marketing. She loves cats, coffee and writing at her blog, That Cortnie Girl. She is most passionate about feminism, queer issues, fat issues and empowering women.

You can’t honor MLK by forgetting what really ...

You can’t honor MLK by forgetting what really happened. Don’t just make it about pretty speeches. His was a fight against poverty and for the liberation of Black and other people of color. Act to dismantle systemic oppression - that’s what this moment and his legacy demands. Repost from @sistersong_woc ...