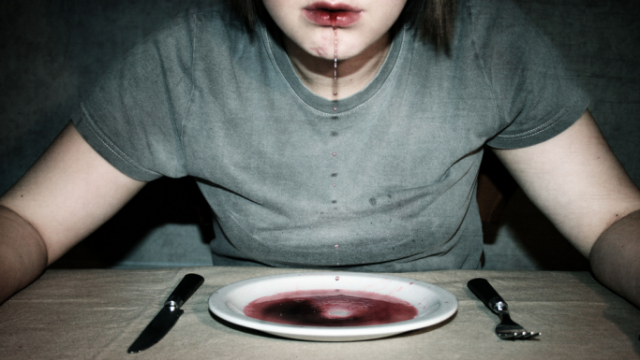 The Misconceptions of Eating Disorders

I’m not a teenager nor am I anorexic. I am a 47-year-old diabetic and overweight woman with a very unhealthy relationship with food. I had been in a major state of depression for over a year and barely moved from my bed. I completely stopped taking my insulin and other medications. I was unconsciously committing a slow suicide. I needed help, and I couldn’t do it alone. I confided in a friend who found help for me, and I quickly found myself in an eating disorder clinic for a 30-day stay.

I went into the residential home thinking I would be the lone fat chick surrounded by skinny women bundled up in warm clothes while I was sweating through my tank tops and pajama bottoms. I was convinced I was the only obese person in the world ever sent to an eating disorder facility. At my first meal with the other residents, I never wanted to bolt from a place as much as I did at that moment. We had 45 minutes to finish our meal. I was done in 15 minutes and for the next half hour, I watched the rest of the women at my table struggling, crying and cheering each other on while I sat there thinking, “Damn, girl, I’ll finish that for you.”

What I learned during those 30 days is that I wasn’t the first overweight woman on earth to stay there. I may not look like the teenage girls with anorexia, but we all process things in a similar way. I learned that eating disorders don’t discriminate against age, race or size, and it’s never about the food and is more than just an eating disorder. A lot of people have OCD, ADD, are substance abusers, cutters, bipolar and have serious depression, as well. I was diagnosed with OCD and major depression during the evaluation process.

Although I think the media needs to be realistic about women and body types, the majority of the women whom I met with ED are not vying for a position on the next cover of Vogue. The women whom I’ve met with this disorder are all beautiful, successful and compassionate human beings that constantly give of themselves. A lot of them have very impressive careers and are academic scholars. In my own observations, the common thread is over-achievement. They are trying to be perfect in all aspects of their life.

Another misconception is that only women have eating disorders. I’ve met several women who have sons and brothers with exercise bulimia, which is when someone exercises obsessively then binges and purges their meals. Any man can have anorexia, bulimia or be binge-eaters just as easily as women.

I feel blessed I found help with my eating disorder. I was lucky enough to receive the full 30-day treatment, but many aren’t so lucky. Some health insurance companies are tough on inpatient residencies. The insurance companies evaluate patients on a week to week basis, and at any time you could be denied coverage and asked to leave. Some people didn’t even make it the first night. We had to wait for approval before we unpacked our bags. If you were there, then you REALLY needed to be there, but some of the most severe cases were sent home before they were ready. It’s heartbreaking watching someone leave when you know this is their only hope, and the health insurance company is deciding their fate because of money. Another misconception is the “just eat” response by people who don’t know anything about this disease. This is not a choice; it’s a sickness. It needs to be treated as if it were cancer because it can be deadly. I’ve met several women who had strokes and heart attacks in their 20s, burned out their esophagus’ from purging and attempted suicide.

Since my stay, the hardest thing for me has been realizing who my real friends are. Rumors were spread by people I trusted, and I received an anonymous letter calling me a fraud, lazy, disgusting and other choice accusations. Did that cause a setback? Yes, but it didn’t cause a relapse. Clearly, I’m much healthier than they are, so I figure I’m doing pretty well. There is a lifetime of baggage that I have to sort through and there is a negative dialogue that has been running through my head since childhood and needs to be rewritten, but I’m still in the game. The tools I’ve learned since leaving residency are teaching me to stay focused and believe in myself. Everyday, I think about the people I’ve met on this journey. We are going through a very specific experience together and in many ways these women will be the most influential people in my life.

I can honestly say, although I’m not perfect, I’ve made major progress. I have my moments but I see a nutritionist once every two weeks, and I’ve lost weight consistently since my stay. I don’t spend my life in bed and isolate myself from the world anymore. I wear an insulin pump now, and I take my meds everyday. Between my sister who was there for me every step of the way, and the women I met, I feel I have enough of a support system to pick me up when I fall. Right now, I’m walking on my own, but I’m mindful of my steps.

Christina is a freelance writer on such topics as female indie artists, social media, and local events for both Examiner.com and CBSLocal Philly. She’s also an artist, social media consultant and a music junkie, and blogs about all the above topics incessantly. You can find her various blogs and articles here. Follow Christina on Twitter @cristinatweetz

More From Christina Thompson view all